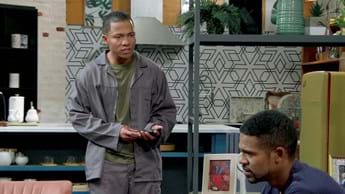 If it’s not on-the-field drama for the Stryders rugby players, there’s more than enough scandal, romance, fights and more for the people involved with the team in S6 of Afrikaans soapie Getroud Met Rugby, Mondays-Fridays on kykNET (DStv channel 144) at 18:00.

October alone sees Ronnie (Donovan Pietersen) dealing with the fallout of his drug arrest and how it’s affected his reputation in the community. But luck is at hand because not everyone is going to turn their backs on the young man.

And there’s a double dose of love stories. Lulu (Ansu Visser) arrives at work and walks straight into her hunky ex who’s waiting to greet her, and equally devious Bart (Pierre Breytenbach) and Amanda (Natasja Jacobs) find that they’ve got a lot more in common than they realised this October on Getroud Met Rugby.

Blow your whistle and hit the couch, it’s time for action.

After Ronnie (Donovan Pietersen) was released from jail a few months ago, he desperately tried to build a new life for himself. His cousin, Liam (David Johnson), and Liam’s wife, Candice (Claudia Jones), kindly gave him a roof over his head and Ronnie also managed to get a job as janitor at the stadium where the Stryders train. He even fell in love with the lovely pompom Ivy (Tiné Minderon). But trouble’s coming his way…

Ronnie discovers drugs in the rugby players’ dressing room and reports it to the coaches. Cue drama for Liam, who’s hauled over the coals when more drugs are found in his locker and he’s kicked off the team. While Ronnie feels bad for his cousin and for the fact that he’s told someone about the drug drama when he was forbidden to utter a peep, Liam has more to deal with – Markus (Danie Putter), who previously meddled in Liam and Candice’s marriage, sends an SMS to Candice and Liam jumps to conclusions, thinking that Candice is cheating again.

What will the cousins do as they feel the world closing around them?

Liam’s mom, Charlene (Nazli George), arrives to support him and she’s bringing something for Ronnie, too – a letter from their friend Charlie who passed away recently (offscreen) and asked for Ronnie to get the letter after his death.

Charlie’s last act on Earth is to confess to planting drugs in Liam’s car years earlier – the same car that Ronnie was driving when he was pulled over by the cops and the same drugs that Ronnie was blamed for being in possession of. So Ronnie lost six years of his life in prison and it was all Charlie’s fault! This changes things for Ronnie because he’d resented Liam all this time, thinking that the drugs were his.

“Ronnie is devastated when he reads the letter and tries to commit suicide. But now it’s up to Liam to forgive Ronnie, and Ivy must decide whether she wants to build a future with somebody who misled her and everybody else, and who put his cousin’s career and marriage in jeopardy,” says Donovan.

Love on the horizon

While dark clouds gather around Liam and Ronnie, Lulu (Ansu Visser) has new hope for her future. Her ex-boyfriend, Nico (Pietie Beyers), a farmer from Heidelberg, unexpectedly shows up at Pottie’s where she works as a bar lady.

“Lulu is surprised and even more so when Nico tells her that she is still the love of his life, and that they must try to rekindle their relationship,” says Ansu. “But she also tells him that her life has changed dramatically and that she is a single mother of a baby girl, Anja,” she adds. Nico is still adamant to get Lulu back in his life and wants to meet her daughter as well as the father of her child, Simon (David Louw).

Lulu is over the moon about the new developments in her life, but she is in doubt whether she wants to give up her cosy life in Johannesburg and become a farmer’s wife. Time will tell if Lulu will finally find true love after her ex-fiancé, Simon, broke up with her to work things out with his ex-wife, Renate (Christel van den Bergh).

The Stryders captain Ryno (Adrian Steyn) is still licking his wounds after his husband, Thinus (Arno Marais), left him for an attractive new job opportunity in Cape Town, and their marriage collapsed. Ryno tries to build a friendship with the new stylist in town, Meyer (Stiaan Smith), which soon starts to blossom into something more beautiful.

Love is also in the air for sly Bart and Amanda after Kristien (Marlee van der Merwe) broke off her relationship with Bart. “He and Amanda really get on like a house on fire,” says Natasja. “Amanda feels for the first time there’s someone who really cares for her after her husband, Reitz (Sean van Noordwyk), passed away.”

But now that Amanda’s true colours are revealed, one wonders if it’s love or more just birds of a feather…