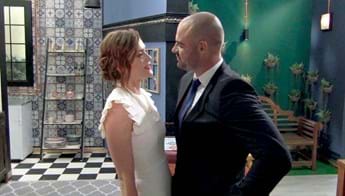 It finally happened! Cute waitress Lulu (Ansu Visser) listened to her heart and proclaimed her love for Simon (David Louw) on the soap Getroud Met Rugby on kykNET (DStv Channel 144).

Their 2-year road to love has been challenging, but now they are set to embrace a new feature and vow to bury the past with all its betrayal and hurt. “Lulu was tired of fighting against her feelings for Simon for so long. She is 100% certain that she made the right decision, and that Simon is the guy of her dreams,” says Ansu.

Just a month ago, Lulu would’ve still married her now-ex-fiancé, farmer Nico (Pietie Beyers). He was everything she wanted – on paper. But there was 1 problem: her ex-fiancé and the father of her baby, Anja (Kiara-Lee Brits), Simon, who she just couldn’t cut out of her life.

Nico was always threatened by Simon and even admitted it. Nico tried his best to make the most of the situation as he saw Lulu as the love of his life, but Lulu decided to end things with Nico shortly before their wedding date. “Lulu didn’t end their engagement because she chose Simon and not Nico. Her heart just wasn't fully with Nico. She also knew Nico would continue feeling threatened by Simon and as Simon is the father of their daughter, he will always be a part of their lives,” says Ansu.

And who could forget about the dreams that Simon and Lulu had. Simon started dreaming about Lulu 2 months ago, and then Lulu started dreaming about Simon. When they found out about each other’s dreams, Simon’s mom, Yvonne (Karin Retief), and his housekeeper, Virginia (Vicky Kente), saw it as a definite sign that the 2 should be together. “But Lulu was stubborn. She was scared to choose Simon again, as he dumped her before to reunite with his now-ex-wife. She was even upset when he declared his love for her at Pottie’s, where she works.”

After Lulu confesses her love to Simon, they spend the night together with Simon’s baby. Regardt (Daniel Louw). Even though it’s usually the man who asks the woman’s hand in marriage, Lulu takes the lead and asks Simon to marry her. “Simon’s taken aback at first, but then he immediately says: ‘Yes, and okay, okay, what are you doing tomorrow?’” adds David.

Ansu explains that Lulu doesn’t feel the need for a long engagement. “They are now past dating, they have been engaged before. Why wait any longer? They know each other well enough to be sure they are a match.” Simon and Lulu get married in court and they couldn’t be happier. “It’s not about the flowers and wedding cake and all the add-on for Lulu. She just wants 2 people to swear eternal commitment to one another,” adds Ansu.

The future looks bright for the newlyweds. “But there will be challenges,” says Ansu. “Simon has his way of raising his son, and she has her way with Anja. But somehow they will find a good middle ground.”

“Simon is relieved that Ansu finally gave in and that they are now together,” David concludes. “Their biggest challenge will be to truly forgive each other for the past and the mistakes. And for Lulu to raise his boy as if he is her biological child. But I’m sure they will be a tight-knit family.”