Music, movies and reality series on DStv Access this December, from Buddy vs. Duff Holiday to Christmas In The Highlands and Roundtable: Hottest MCs 2021 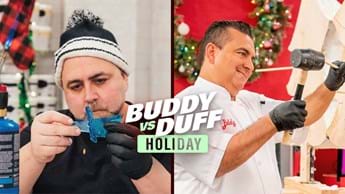 DStv Access is preparing a banquet of festive viewing this December, and when there’s so much to choose from, it’s easy to Choose Joy. Now close out the year just where you want to be, doing what you love.

We’ve highlighted just six of the fun seasonal movies ringing those bells, including local hits A Zulu Christmas and A Christmas Chorus. And because it wouldn’t be the jolly holly season without a little romance in the snow, we’ve thrown in Christmas In The Highlands.

TLC (DStv channel 135) is going all out on their medical reality series, with a brand-new season of Dr. Pimple Popper, a Dr. Pimple Popper Christmas special, and 2 new shows, The Hair Loss Clinic and the documentary Germaphobia. And if you want that family feeling, there’s also reality with personality in 7 Little Johnstons Season 7, and 90 Day Fiancé: The Other Way Season 3 (and the after-the-show show, Pillow Talk: The Other Way).

If you’re staying safe and staying home, DStv Access has plenty to keep you entertained around the house, too, from Buddy Valastro taking on Duff Goldman in their new competitive baking series, Buddy vs. Duff Holiday, to cooking and travel in A Long Weekend With Rory O'Connell and home reno with George Clarke's Old House New Home Season 3.

Finally, closing out the year, MTV Base (DStv channel 322) will give you the soundtrack for the season all the way from 1 December until New Year’s Eve, with Roundtable: Hottest MCs 2021, MVP Top 50, 31 Days DJ Takeover and more.

All this when you Choose Joy and choose DStv Access this December.

War drama centred on the Christmas Truce of 1914. French, Scottish and German soldiers in the trenches start an informal ceasefire after the sound of the Scottish troops singing Christmas songs and playing bagpipes drifts to the Germans and French, who respond with their own music. With Ian Richardson and Diane Kruger.

Christmas In The Highlands

American perfume expert Blaire Henderson (Broke Burfitt) is sent to the remote Scottish Highlands during the Christmas season to get her hands on the formula for a limited edition perfume from an Earl (Dan Jeannotte) while he’s preparing for his annual ball. But she gets a new item on her to-do list: Fall in love.

Lockdown has hit the South African entertainment industry hard. Theatres are closed, and that means no festive pantomime. Now, a group of theatre friends are coming together to save Christmas from the Coronavirus. But egos are running hot and personal agendas could wreck their good intentions. With Bianca Flanders, Namisa Mdlalose and Dean Balie.

Documentary special. Find out what happens when a fear of germs takes over people’s lives. Brian, Keshius and Toni are doing things like washing their hands 80 times a day, wrapping car seats in plastic, making guests wear hazmat suits and roasting in a hot sauna to kill bacteria before sex thanks to Germophobia.

Dermatologist Dr. Sandra Lee treats challenging skin conditions to give patients a shot at their dream lives. This season, Dr. Sandra treats Tamyra, who routinely shaves the skin off the bottom off her foot but it keeps growing back in thick layers, and Drag Queen Corey has an unsightly lump in an unmentionable place.

TLC is loading their holiday sleigh with the most shocking moments from your favourite medical reality series. Look out for a brand-new Dr. Pimple Popper Christmas special, along with patients from The Bad Skin Clinic, My Feet Are Killing Me, My 600Lb Life and more.

Reality series about the Johnsons, a family living with Achondroplasia Dwarfism. This season, Anna makes a strike for independence as she moves out on her own, while Liz and Brice celebrate their anniversary, and the family enjoys Mother’s Day. Anna and Elizabeth both throw dinner parties, while Josh struggles to find a place to rent.

90 Day Fiancé: The Other Way Season 3

Americans move to a foreign country in the name of love, but they have just 90 days to sort out their paperwork before bureaucracy curb stomps Cupid. This season, Kenny and Armando are planning their wedding in Mexico, Ellie searches for Victor, who goes missing when a hurricane strikes their Colombian island home, and Corey and Evelyn are keeping huge secrets.

Pillow Talk: The Other Way

Your 90 Day reality franchise favourites invite you into their homes as they watch the latest episode of The Other Way. Libby is surprised to see Corey and Evelin together again, Molly and Cynthia react to Leonardo’s gift to Ari, while Brandon is convinced that Ari is still really into her ex.

Cory Bengtzen and his team of daring pilots have the ultimate strange job: Delivering used aeroplanes to remote destinations around the world… by flying them there themselves. See them get planes everywhere from the Siberian Arctic to the Amazon rainforest, to the Sudan. If the weather doesn’t take you down, the tight sleep schedule might.

Reality series about the officials who patrol New Zealand’s waterways. The Police Maritime and Dive Units have to be ready to take on everything from drunken “sailors” on party boats, to crowded water events, to criminals and emergency rescues. Follow the action with underwater footage shot by the Dive Squad.

Buddy and Duff compete to see who reigns over the holiday season in this 4-episode competition. Each week the 2 cake artists will choose a different theme and then they and their teams will have just 20 hours to create a masterpiece each. masterpieces. Judges include Gesine Prado, Elizabeth Falkner, Stephanie Boswell, and Valerie Gordon.

A Place In The Sun: Summer Sun Season 1

British house hunters are looking for a holiday home where they can enjoy sunshine all summer long. Find out what properties look like in Huelva in Southern Spain, Andalucia, Almeria and the Costa Blanca. We’ll also see Limousin in France, Crete, Lazio in Italy and Portugal’s Algarve.

Architect George Clarke helps homeowners to make their Georgian, Victorian and Art Deco more liveable for modern life, without destroying the house’s spirit. In each episode, George will visit 2 houses, where he will present the owners with design solutions about what to chuck and what to cherish.

Chef and food writer Rory O’Connell travels across Europe, visiting a different city in each episode – Palma de Mallorca, Vienna, Lisbon, Madrid, Bath, Nantes, Copenhagen and Edinburgh – to learn about the culture and the cuisine. Feast your eyes on local art and design and attractions, before Rory whips up dinner.

Host Maggie Molloy shines a light on the secret side of the Irish property market. She’s helping her house hunters – who live in expensive cities like Dublin and Galway – to snap up a prize, with properties valued at €100,000 (around R1,8 million), if not cheaper.

Let host Viviana Vigil take you house hunting with the rich and super rich who’re looking for that perfect luxury place to rest their tired feet. Anything they want, they can buy, from bowling lanes in the basement, to rooftops with pools and helicopter pads… in the kinds of neighbourhoods you see on TV.

How To Garden Season 2

Carol Klein has been honing her gardening skills and knowledge at Glebe Cottage for more than 40 years. Now, week by week, she reveals how she works hand-in-hand with Mother Nature to help it to thrive. Learn what to plant in which season to transform your backyard desert into an oasis.

Join the party in style this New Year's Eve with live music performances at a socially distanced club. It’s the ultimate 2021-2022 countdown, featuring the hottest artists and hits from throughout 2021.

MTV Base ends 2021 with the Hottest MC roundtable. A panel of established artists will spotlight the freshest talent making a name for themselves on the South African hip-hop stage. And they’ll be going toe-to-toe to argue for why their favourites should make the list.

It’s the 21 hottest songs of 2021. MTV Base showcases the talent that created the soundtrack to our year, and made us feel powerfully, express ourselves emotionally, celebrate joyfully and just want to hit the dance floor and get loud.

Is the radio driving you mad with repeated oldies? Check out the coolest DJs in Africa & South Africa have to offer over the 31 days of December, with playlists that aim to reshape out entertainment culture through music.

Over five days, MTV Base delves into the music that’s creating movements, inspiring trends, moulding expression, and reflecting the youth. Music is culture and now we can see what was on our minds in our second pandemic year.

Time for a fan freak out. This behind-the-scenes film will give you an intimate look at African rap musician Nadia Nakai as she works on her debut album. Piecing together interviews and live performances, this documentary takes you on a remarkable journey to see the hard work and talent that was involved in making Nadia Naked.

One night only! Thrilling holiday specials and music documentaries on DStv Premium this December

From grown-up flicks to kids films, local movies and reality shows to Christmas With The Moodys - there’s so much reason to Choose Joy with DStv Premium this December

New Crank Yankers, Asseblief & Dankie, Andre Rieu and so much more reason to Choose Joy with DStv Compact Plus this December.

Ancient Aliens Meets William Shatner and so many more documentaries to watch on DStv Compact Plus this December.

From Santa’s Baking Blizzard, to Below Deck: Sailing Yacht Season 2, everything is more glamorous on DStv Compact this December.

From The Hot Zone: Anthrax, to Christmas By Starlight, DStv Family is gift wrapped this December.