Music, movies and laughter on DStv Compact Plus this December

New Crank Yankers, Asseblief & Dankie, Andre Rieu and so much more reason to Choose Joy with DStv Compact Plus this December. 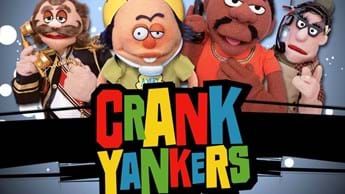 DStv Compact Plus is bringing viewers a blessed and beautiful December full of uplifting local movies that celebrate the value of kindness. There’s beautiful classical music, too, and laugh-out-loud shows to keep your family in stitches when you sit around the TV together.

Our local movies range from heartfelt Christmas stories like Asseblief En Dankie with Crystal Donna Roberts and Laudo Liebenberg, which embraces the miracle of the season, to the laugh-out-loud silliness and family fun of Poena & Poenie.

All the big names in comedy are here, too, including Johnny Vegas, hosting all his comedian friends in the brand-new celebrity talk show The Funny Thing About, while Cedric the Entertainer brings us The Greatest At Home Videos Season 2 and the brand-new Crank Yankers Season 6 brings us absurd puppet mischief from Jimmy Kimmel. And if you love your comedy with a wicked twist, Roast Master Nikki Glaser and a host of comedians are here to celebrate the 100 Best Roasts of All Time.

All this and beautiful music, too, when you choose joy and laughter, with DStv Compact Plus this December.

Keen for more? Here are the must-watch doccies and reality series to watch on DStv Compact Plus this December.

The Funny Thing About Season 1

British comedy talkshow hosted by Johnny Vegas. Prepare for honest confessions and anecdotes as Johnny’s guests, including Anthea Turner, Vanessa Feltz, Carl Fogarty, Nina Wadia, James Argent, Jamie Laing and James & Ola Jordan from Strictly Come Dancing, talk about everything from growing up and dating to kids and the holidays.

Watch The Funny Thing About Season 1 weekdays from Monday, 6 December on Comedy Central (DStv channel 122) at 22:00

The Greatest At Home Videos Season 2

Host Cedric the Entertainer showcases viral home videos captured during social distancing and the COVID-19 lockdowns. This season, choreographer and singer Paula Abdul helps Cedric to surprise a family, Cedric has a zoom call with 2 military buddies whose reunion moved the country, and Cedric chats with his The Neighborhood co-star, Max Greenfield.

A Quebec-based troupe of comedians ambushes the unsuspecting public in this prank show. This season, see what happens when a thief steals grapes, the public reacts to an ugly baby, a bride falls over, a comedian pretends to spit-wash their cellphone, and more.

weekdays from Wednesday, 1 December on Comedy Central (DStv channel 122) at 22:30

The Funniest Adverts On The Planet

British comedian Josh Widdicombe introduces some of the funniest adverts ever made from around the world. Check out the creepiest “cute” kids, surprise celebrity product endorsements, ads that used dating and relationship to try sell us stuff, suspiciously specific medical conditions, ads that force feed us foods nobody asked for, and more.

Watch The Funniest Adverts On The Planet weekdays from Saturday, 4 December on Comedy Central (DStv channel 122) at 11:00

Two lives change for the better after a homeless woman (Crystal Donna Roberts) saves the life of a rich CEO (Laudo Liebenberg) and, moved by the Christmas spirit, he invites her to recover in his penthouse. But he doesn’t know what to think when she claims to be from another world, and strange things start happening.

In 1967, 4 South African Republican Intelligence Agents investigate an unidentified object that landed on a farm in the Karoo. What follows is a found-footage sci-fi mystery as the agents try to determine the nature and origins of the UFO, while it starts to have a strange effect on them. With Pietie Beyers Albert Maritz and Morné Visser.

Grumpy old man Bert Spies (Pierre van Pletzen) is taken aback when his doctor hands him an unusual prescription: To start enjoying life more, be kinder. Desperate to turn his life around, Bert slowly realises how much better he feels when he uses his mouth for smiling at the people around him instead of complaining to or about them.

Bert Spies (Pierre van Pletzen) is back again when his teenage grandson, Drikus, shows up at his door like a sulky cloud. Bert thinks he knows just the treatment for Drikus’s troubled soul: Finding joy and being kind. But some wounds don’t heal that easily, and Bert still has a lot of growing to do himself.

Handyman Poena and singer Poenie get a job offer that might be too good to be true from the luxury cruise ship, The Floating Princess, which is anchored in East London's harbour for routine maintenance. Poenie has 3 weeks to complete a towering job list, and Poena must sing to entertain the guests.

Soprano Magdalene Minnaar and her pianist, Maryke Johnson, perform a programme of popular works from the Baroque to the classical musical era, starting with Bach and ending with excerpts from Evita, The Producers, and Les Misérables. Recorded at this year’s Vrystaat Klank en Klassik (VKK) arts festival.