Stunning documentaries & reality on DStv Compact Plus this December

Ancient Aliens Meets William Shatner and so many more documentaries to watch on DStv Compact Plus this December. 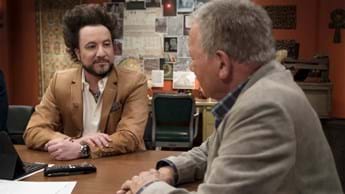 DStv Compact Plus celebrates the value of curiosity with great reality series and documentaries this December.

True crime series focus on breakthroughs not just in how we investigate crimes using familial DNA, like Bloodline Detectives Season 1 and UnMasking A Killer Season 1, but in how we understand the psychology of killers and the impact of their crimes, too, with shows like Inside Evil With Chris Cuomo, which includes direct interviews with serial killers.

The reality series on DStv Compact Plus give insight into other kinds of lives too, including the human side of stripping in Beyond The Pole Season 2, the lives of Louisiana’s alligator hunters in Swamp People Season 12, and South African adventurer Riaan Manser shows us all how to have a great time in our own country in How To Adventure Season 1.

The History Channel (DStv channel 186) hosts 3 documentaries on the Bible itself, the process of crucifixion and how the 10 Commandments have influenced modern law. It’s also UFO month on History, with 4 documentaries and series focussed on out of this world phenomena. And along with a brand-new season of Ancient Aliens, we also get Ancient Aliens Meets William Shatner season 1, in which 1 of the most famous faces in science fiction gets to pose his personal questions to the Ancient Aliens panel of experts!

Keen for more? Here are the must-watch Movies, Music and Comedy on DStv Compact Plus this December.

Beyond The Pole Season 2

Reality. Strippers Lyric and Yaya clash during a tea party, and someone spreads rumours that Lyric had AIDS. Empress searches for her estranged son, Jasiah, her political views wreck Gigi's podcast, and Empress reveals the identity of her babydaddy, but her gender reveal party turns into an intervention. And Gigi plans to return to the pole.

Southern Louisiana’s hunters are in for a shock when an alligator population explosion eats its way through most of the swamp’s food supply. There’s a new kind of meat on the menu after the ravening alligators, desperate for food, start threatening local residents. And veteran alligator hunters train a new generation to take on the threat.

How To Adventure Season 1

Riaan Manser has crossed Africa on bicycle and rowed from Africa to America. Now he takes people on 24 thrilling adventures with him. Riaan takes a midwife skydiving on the Garden Route, treks the Drakensberg at Tugela, goes snorkelling off Hout Bay with a magazine editor, and tries canyoning in the Storms River, and more.

Watch How To Adventure Season 1 from Saturday, 4 December on Curiosity Channel (DStv channel 185) at 23:00

Chris Cuomo delves into the science and psychology of serial killers, through direct interviews with the killers themselves, their survivors, detectives, behavioural scientists and criminal psychologists. Coming up: Killer twins, survivors of rape and their struggles with the justice system, serial killer Joel Rifkin, and more.

Watch Inside Evil With Chris Cuomo from Monday, 20 December on CBS Justice (DStv channel 170) at 19:00

Cold cases are being solved around the world now not just thanks to DNA profiling, but by the new development in Familial DNA testing, which allows detectives to find reliable leads in cases using DNA from surviving loved ones, or even the suspected perpetrator’s family (as happened in the Golden State Killers case). Now watch the science in action!

This 5-part documentary series puts the Golden State Killer case under the microscope. In the 40 years that he operated, he committed 12 murders in 51 attacks in California, until he was finally captured in 2018, tried and convicted. Find out about his patterns, mind games, Familial DNA testing, and escape methods as survivors and investigators speak out.

Murder In The Outback: The Falconio And Lees Mystery Season 1

Watch Murder In The Outback: The Falconio And Lees Mystery Season 1

Banned From The Bible: Enigmas of The Old Testament

Religious scholars examine the stories said to be banned from the Old Testament Bible. Was wise king Solomon portrayed as a sorcerer? Was Adam’s alleged first wife, Lilith, a succubus? Did ancient biblical compilers delete prophecies of an apocalypse from Abraham’s descendants? And do we still have these ancient texts?

Watch Banned From The Bible: Enigmas of The Old Testament on Sunday, 19 December on History (DStv channel 186) at 20:15

This documentary explores the origins of crucifixion as a torturous method of execution. It was documented 500 years before the time of Christ, when Persian King Darius crucified 3,000 of his political opponents in Babylon. Later, Rome’s Alexander The Great ordered 2,000 crucifixions after the siege of Tyre. And the practice continues to this day.

The Ten Commandments: The Laws of God

This 2-part documentary (part 2 follows at 21:05) explores the origins and historical context of the 10 Commandments given to Moses in the Old Testament. Experts including lawyer Alan Dershowitz and theologian Daniel Smith Christopher explore the commandments then, and how they affect our legal system now.

Ancient alien theorists ask, as we are preparing to colonise space, whether we are simply returning to our extra-terrestrial past. And what will mankind be like, as the alien explorers ourselves, as we step onto strange new planets? The series also revisits Erich von Däniken’s book Chariots of The Gods.

The Proof Is Out There Season 1

Delve deeper into the world’s most mysterious videos, photos, and audio recordings to see how some seemingly impossible things were caught on film, including giant beasts, UFOs, apocalyptic sounds, hairy humans, alleged mutants from the deep and more. Series host Tony Harris takes nothing for granted as he searches for answers.

As populations grow across the world and urbanisation soars, the pressure is on architects, engineers and urban planners to come up with the kind of buildings that can grow with our changing needs, and that take care of social needs rather than further dividing populations along financial and political lines. Part of Super Science Mondays.

Is there a conspiracy of silence about alien encounters? This 3-part series covers everything from the military and law enforcement’s alleged top secret UFO encounter files, to claims that mankind’s technological leaps are based on alien technology, to the US Presidents’ supposed encounters with UFOs, including presidents Eisenhower, Nixon, Carter, and Reagan.