Merry movies and serious series on DStv Family this December

From The Hot Zone: Anthrax, to Christmas By Starlight, DStv Family is gift wrapped this December. 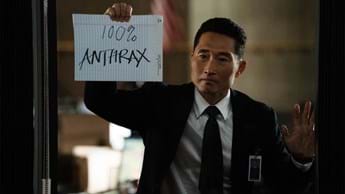 Whether you want some holiday movie magic, or you want to spend your break getting into a top-quality serious series this December, you can choose joy for the season with DStv Family.

We’ve highlighted 6 brand-new movies from the fabulous month-long Christmas movie festival on Universal TV (DStv channel 117), in which stars like Vivica A. Fox will bring you the joy and romance of the season – with a touch of seasonal magic and all the jolly holly decoration and winter wonderlands your heart could desire.

And if you’re looking for a top-notch series to sink your teeth into, The Hot Zone: Anthrax Season 2 on National Geographic (DStv channel 181) turns the 2001 US Anthrax scare into a gripping drama series with stars Daniel Dae Kim and Tony Goldwyn. It’s truly a case of truth being twistier than fiction. And thanks to the new ME channel (DStv channel 115), you’ll also be able to catch FBI Season 3, along with a scandalous new ripper-from-the-headlines Hindi telenovela, Illusion.

Keen for more? Here are the must-watch reality & lifestyle series on DStv Family this December.

Watch Deliver By Christmas on Saturday, 4 December on Universal (DStv channel 117) at 15:00

Watch Christmas By Starlight on Sunday, 5 December on Universal (DStv channel 117) at 15:00

A Husband For Christmas

Two graphic designers, Brooke (Vivica A. Fox) and Roger (Rico Ross), whose companies have just merged, agree to a marriage of convenience. It allows Brooke to get one over on her sister, who’s just announced her engagement to Brooke’s ex. But what started as a lie slowly transforms into true love.

Watch A Husband For Christmas on Saturday, 11 December on Universal (DStv channel 117) at 15:00

Heart of The Holidays

When a job transfer falls through, leaving her temporarily unemployed, stockbroker Sam (Vanessa Lengies) is forced to return to her family’s home in upstate New York for the Christmas holidays. But staying in town also sets her up to run into her high-school sweetheart, Noah (Corey Sevier), the guy she left behind to chase her career.

Morning show producer Kelly (Aimee Teegarden) becomes a feature on her own show when her staff find out about her new year’s resolution to accept every social invitation that comes her way for a month. But will handsome Tom Malone (Michael Rady) be one of the people she says yes to?

A small town’s mayor, Alex (Brooke Nevin), decides to hold a special Christmas market to help local businesses that are under financial pressure thanks to a disruptive construction project. She’ll need everyone’s help, including that of the reclusive mill owner, Darcy (Corey Sevier), and romance sparks when she goes to invite him to the event.

Watch The Christmas Market on Saturday, 18 December on Universal (DStv channel 117) at 15:00

Historical drama. Just days after 9/11, an anonymous sender targeted journalists and politicians in the United States by sending deadly anthrax through the US postal system. FBI agent and microbiologist Matthew Ryker (Daniel Dae Kim) tries to find a pattern to the attacks while US Army microbiologist Bruce Edward Ivins (Tony Goldwyn) starts cracking under the pressure.

Maggie returns from her undercover work, but she and OA aren’t necessarily going to click back into place as easily as they would have assumed, thanks to Maggie’s romance on the side with her undercover agent lover. And the team investigates a mass shooting perpetrated by a white nationalist organisation.

This shocking new telenovela is based on incidents within a real-life high-profile Indian family. Sisters Pooja (Shrenu Parikh) and Ishani (Tina Ann Philip) take on the names Jhanvi and Rani as they target a tycoon for revenge. But when 1 sister falls in love with the wrong brother, these sisterly allies become enemies.