From Santa’s Baking Blizzard, to Below Deck: Sailing Yacht Season 2, everything is more glamorous on DStv Compact this December. 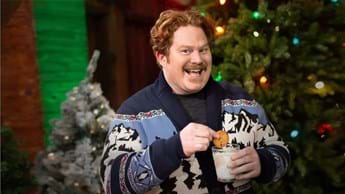 What’s the festive season without lashings of glitter, glamour and fun? That’s what DStv Compact is bringing to the party this December when you Choose Joy with DStv.

The People’s Choice Awards will have us waiting to see if a South African scoops the African Social Star. And then it’s glamour all the way on Mzansi Magic (DStv channel 161) throughout the festive season and into the new year with a host of top-secret shows including a Kelly Khumalo music special and more musical notes from the Gauteng Maskandi Experience and the Buyel’Ekhaya Pan African Arts Festival.

If that has you in the mood for the high life, check out what it’s like to work for the super rich in Below Deck: Sailing Yacht Season 2. Reality fans who finally have time to call their own over the holidays can also check out Love Island South Africa Season 1 and Life With Kelly Season 2.

Speaking of time on your hands, if you love nothing more than to fantasise about your dream home, check out the DStv Compact December deco & reno series, including the brand-new decluttering show Hot Mess House, reno show $50K Three Ways, the new home buying show Call The Closer along with the long-awaited Good Bones Season 6.

And once you’re truly in the holiday mood, enjoy the place where food meets art and talent in Santa's Baking Blizzard, Woolies Christmas Special, and Celebrity Mystery Box.

Keen for more? Here are the must-watch movies & series on DStv Compact this December.

The public has voted for their favourite stars, including this year’s African Social Star nominees like Lasizwe Dambuza, Boity Thulo, Witney Ramabulana and Mihlali Ndamase. And now it’s time to hand out the glittering awards, with host Kenan Thompson. PS: Laverne Cox will be hosting the awards pre-show.

Idols SA judge, Unathi Nkayi, and chef-restaurateur Alessandro Khojane host a dazzling dinner party for their friends, including Minnie Dlamini & Melanie Bala; supercouple Kuli Chana and Lamiez Holworthy, foodie friends Maps Maponyane and J. Something. And they’ll all talk about what a crazy year it’s been, while trying out menus that have a personal touch for everyone.

Also watch out for...

Captain Glenn Shephard commands a brand-new young, attractive international crew aboard the luxury sailing yacht Parsifal III as they cater to the whims of the rich while sailing around Croatia. This season, deckhand Jean-Luc realises that he’s “lost” 2 guests, there’s a naughty game of Truth Or Dare and 2 boat crashes.

Host of Slank Leandie du Randt presents the first-ever local version of this reality dating show. Sexy single South Africans stay at a swanky villa in Cape Town together. Every few days, they must pair off with someone they fancy, and if nobody wants you, it’s goodbye time. New singles arrive throughout the season.

Singer Kelly Khumalo brings glamour back into our lives in a 2nd season of her reality series. Kelly is dating again while at home, her mom, Ntombi Khumalo, who disappeared part way through season 1 after Kelly asked about her biological father, has returned. We’ll also see Kelly draw a line in the sand with babydaddy JubJub.

Surrounded by so much clutter that you don’t even know where to get started organising your house? This is your show. Organising expert Cas Aarssen helps clients to take control of their messy spaces by finding an organising style that will come naturally to them, then supporting them online as they set things to rights.

Interior designer Tiffany Brooks’ clients have $50,000 and big home renovation dreams. She’ll help them to make the most of their cash by offering them each 3 hugely different design plans for different areas of their houses that could take their families’ needs into account.

Lauren Risley spent 10 years helping St. Louis’ pickiest homebuyers to find their dream houses. Now she’s prepared to dish out the tough love to new clients, from perfectionists to people who’re emotionally invested in their current homes, to help them to find the perfect house to buy – and to tackle a renovation project.

Home flipper Mother-daughter duo Karen E. Laine and Mina Starsiak remodel rundown houses, transforming them from ruins into ravishing residences. This season, Mina has a baby on the way, and the duo have a big insect problem to tackle in Old Southside, along with a 100-year-old home that has foundation damage thanks to a fire.

Also watch out for…

This true-crime series explores Alaska’s most brutal murders and the challenges facing thinly spread law enforcement officials in this frontier state. Find out how they caught up with Paul Stavenjord after he murdered Rick Beery and Deborah Rehor in remote Chulitna, and what happened to 11-year-old Mandy Lemaire in Tazlina, a settlement with under 300 people.