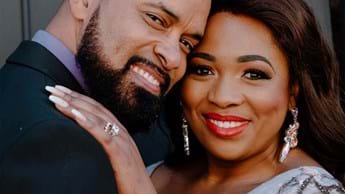 Did you hear Bibi and Jordan are getting married? Well, blink and you miss it! But we can still have a party…

Salon owner Bibi (Stephanie Petersen) and the Stryders’ coach Jordan (Theodore Jantjies) were engaged since April, but had never gotten around to setting a wedding date. Bibi’s work partner, Maryke (Marijke Coetser), was trying her utmost to sniffle out the secretive couple’s wedding plans, but Bibi was tight-lipped about her trip down the aisle.

So when Jordan and Bibi announced out of the blue that they were breaking away for a weekend to Cape Town, their sudden plans made Maryke suspicious. Hmm. 2 super busy people taking an impulsive trip at this busy time of the year? Bibi not answering her phone for a whole weekend? Something is cooking!

Upon their return on Monday, 15 November, Bibi and Jordan shocked pretty everyone with their announcement that they had eloped: They are now legally married, and they couldn’t be happier!

Their friends have no other option than to throw their hands in the air and throw this sneaky couple the wedding party of the year on Friday, 19 November.

“It was Jordan’s brilliant idea and Bibi struggled to keep it secret because they wanted to surprise their friends,” says Stephanie. Theodore says that Jordan has never been so sure about his decision. “Bibi just ticks all the right boxes, and when he realised that Bibi is his dream wife, he just couldn’t wait to put a ring on her finger. And he thought the beautiful Cape was just the place to get married.”

Maryke was caught off guard by the wonderful news, but then also urged Bibi to have a celebration for their friends, because they all earned it. Bibi surprised Maryke again, by asking that the wedding party happen within just 4 days – because she wanted to have the celebration in a proper wedding dress! “It was part of Bibi’s healing process to wear a wedding gown again after her big trauma a few years ago when her fiancé, Ike (Fezile Mpela), was shot on their wedding day – just before they got married,” Stephanie explains.

Celebrations are in order

But wait, there’s more! The Stryders organised an instant bachelor party for the groom on the day he and Bibi returned from the Cape – and it was Jordan’s turn to get rattled. The CEO of the Stryders, Schalk (Johan Scholtz), called an extremely hungover Jordan to his office the morning after the bachelor party to haul him across the coals. “Schalk scolded Jordan and told him that he was very irresponsible to drink so much the previous night and that he barred him from coaching that day,” says Theodore. “Jordan only realised that Schalk was pulling his leg when he congratulated him on his wedding and Jordan was very relieved.”

The wedding party in Pottie’s is going to be really special. We’ll see Bibi looking like a ray of happiness in her beautiful wedding dress, and her handsome groom is going to look ravishing in his tailored suit. “They decide to have a small celebration with only their best friends and colleagues,” says Stephanie. “And the festive occasion also gives them the opportunity to do their wedding vows.”

Meant for each other

Stephanie says Bibi and Jordan’s love story is definitely an “and they lived happily ever after” fairy tale. “Jordan’s honesty and sincerity attracted Bibi to him, and just the fact that he was able to look past her brokenness and accept her just the way she is. His love healed her.”

Theodore adds that Bibi “just happened unexpectedly” to Jordan – he wasn’t even looking for love. “Bibi is an angel and he gets goosebumps every time when she sings. She is just an amazing woman and they are soulmates and best friends.”

After the wedding party, the Stryders and their loved ones have more hope and expectations for the future, because watching these 2 lovebirds everybody realises that love conquers all!