The Wife Season 3 | Watch it on Showmax 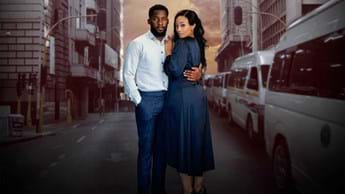 First there was Mbalenhle Mavimbela as Hlomu The Wife. Then there was Khanyi Mbau as Zandile The Resolute. And now there’s Gaisang K Noge as Naledi His Love.

Today is Gaisang’s first day on the set of the record-breaking, Twitter-topping Showmax Original telenovela The Wife, inspired by Dudu Busani-Dube’s bestselling novels.

Naledi, a doctor, starts falling for fan favourite Qhawe Zulu (Kwenzo Ngcobo), dubbed ‘the Woolworths of Amadoda’ by Twitter. Like Hlomu and Zandile, she’ll come to understand that loving one of the Zulu brothers means loving all of his dark and tumultuous past. As much as she will enjoy the trappings that come with being the wife of one of those rich, handsome, powerful and dangerous men, she must also live with the inherent danger that remains.

We caught up with Gaisang to find out more:

“Today is my first day on set but I’ve obviously interacted with Kwenzo and the chemistry is there. He's very kind and has been very helpful in assisting me with anything Naledi and Qhawe related. We both care about the story and are looking forward to telling it. So it’s been fun.”

When did you start acting?

“I started working in the industry professionally in 2018; I've done some stage, some commercial work and some other TV stuff. I also play Mampho in House of Zwide. She’s fire: she’s very spicy and goes for everything and anything she wants.”

How did your casting process for The Wife go?

“As actors, this is what we do all the time: we audition. But I don't think I've ever been so nervous casting before; I guess it was because I just loved Naledi so much. She’s sweet and loving but she’s also reactive. Some people call it crazy but I think it’s passion. She expresses her love and isn’t afraid to give you her heart.”

Did you feel pressure coming into The Wife series?

“I'm stepping into this role that already exists and people love so much. It's scary. There is a level of pressure because the performers in this story are brilliant, and people love this story so much, so you don't want to let them down.”

“But the advantage of playing Naledi is that, even in the actual story, she just joined the world out of nowhere. She's an outsider; she has no relations. So I use that energy to my advantage.”

“I’m not like anyone else; I can’t be like anyone else. All I can do is be Naledi. The only shoes I have to fill are hers. Nobody else. Everybody’s unique and perfect in their own way, so I’m going to hold onto that as my guideline.”

How are you preparing for this role?

“I obviously read the book, so I take a lot from the book: the essence of who she is, her mannerisms, the things that she does. I started using nude nail polish because that's what Naledi does. I'll eat a certain type of food because she does that. I started copying a lot of the way she lives in my own life.”

“And I ask a lot of questions. I ask the creative director, Mr Fiks, and I ask Kwenzo questions as well. It's just a matter of constantly reflecting and thinking. I also started watching some medical stuff, to get the feel.”

How similar are you and Naledi?

“We’re both very strong. She moves; she carries on. We’re both disciplined. Naledi is stubborn. I can also be stubborn. I don't like to say it out loud, but apparently I'm stubborn. She is, to a certain extent, selfless, although that’s so hard to read. Look, some people may disagree, but I will always defend my characters. The big difference between her and I is that I did not go to school for seven years to study to be a doctor. I also don't know if I would stay if I found out my man is a killer or comes from a family of gangsters.”

Watch The Wife only on Showmax, with new episodes every Thursday: You can also Binge watch the first Season of  The Wife on Showmax now