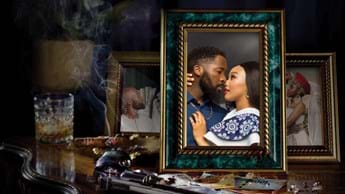 There isn’t a more dramatic end to a day than dinner with a handsome man at his swanky house, the clink of champagne glasses, a romantic proposal . . . and the shouting and stomping as a group of men break in to kidnap you!

Fans are racing back to their TV in anticipation to find out what’ll happen to Dr Naledi (Gaisang K Noge) and her new fiancé Qhawe Zulu (Kwenzo Ngcobo) when The Wife returns for its final season on Thursday, 10 November. If you are just about to explode from waiting, read on as Gaisang drops some hints about Season 3.

Watch The Wife Season 3 from Thursday, 10 November (3 new episodes each Thursday) on Showmax.

The more you know…

According to Gaisang, The Wife Season 3 won’t immediately circle back to the night of the kidnapping. Instead, Naledi’s story will “begin at the end”, and from there, viewers will see how she gets dragged into the backseat of the car. However, Naledi’s reaction to the kidnapping might raise some eyebrows. As Gaisang hints, there’s more to the doctor than meets the eye, which could make her the perfect match for Qhawe. “Naledi realised that Qhawe is not really who she thought he was.”

Gaisang hints that Qhawe is just as much in the dark as Naledi is . . . and perhaps he should tread carefully. “[He is] dealing with someone who has a whole background history. Both Qhawe and Naledi have their own traumas and their own healing. They are trying to figure each other out, so it's going to be very interesting for both of them, without even making it seem like Qhawe is the problem here,” says Gaisang.

Season 3 will introduce us to Naledi’s family, which includes her dad, Kgosi (Sello Motloung), sister Tshidi (Mo Setumo) and a possible rival for Qhawe, Sefako (Stoan Seate). “Naledi’s dad is such a gentle, honourable man,” says Gaisang. “Everybody loves him. He does such great things for the community and she’s just his baby girl!” Gaisang describes Naledi’s relationship with Tshidi as precious. “When Naledi sees her sister, she just sees a best friend. There’s nothing her sister doesn’t know about her. It’s the two of them against the world.” As for the mystery man, Gaisang hints, “Sefako is the guy who could change everything. It’s not a relationship, but he will change everything, and I don’t think anyone can touch him.”

Fans who’re worried that we had all the sweet treats between Naledi and “South Africa’s bae” in Season 2 and now they’re boarding the struggle bus can relax. “People just want a good love story. People want hope. People want to see people who love each other and want to be there for each other, especially with everything around us,” says Gaisang, who promises us that Qhawe and Naledi are going to stay truly, madly, deeply, ridiculously in love, no matter what life (or Season 3) throws at them.

Watch The Wife Season 3 from Thursday, 10 November (3 new episodes each Thursday) on Showmax

Watch The Wife on Compact

Don’t have Showmax? You can get into The Wife Season 1 on Mzansi Magic. The series will build to a Box Set, with all episodes available until March 2023.

Mzansi Magic (DStv Channel 161) is available on DStv Premium, Compact Plus, and Compact. To upgrade your existing package, click here. Or if you'd like to Get DStv, find a service that suits your needs here.