Wiseman becomes Mqhele in The Wife Season 3, with DStv 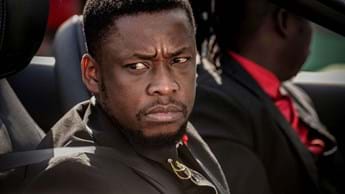 Slipping into the tracksuit and tackies of Mqhele Zulu in The Wife, has proven to be a great fit for Wiseman Mncube. He took over the role after Bonko Khoza parted ways with the telenovela following two seasons.

Aside from playing a loyal brother and gangster as Mqhele, Wiseman had to step into the difficult role of playing Hlomu’s (Mbali Mavimbela) husband. Read on as the actor weighs up the light and shadows of Mqhele.

Season 3 starts with the Zulu brothers under threat, both from Naledi’s (Gaisang K Noge) kidnappers, and from the police. Despite Mqele killing newspaper editor Lux (Kabelo Moalusi) at the end of Season 2, he wasn’t in time to stop the story about the Zulu brothers’ heist ring from making the front page of the papers. “That’s a serious threat. [The crime] hangs prison over their heads, and Mqele can’t be a father to his daughter if he is behind bars. It will break up the family, after everything they have done to stay together,” says Wiseman.

Mqhele is also a driving force behind the Zulus’ efforts to save their brother Qhawe’s (Kwenzo Ngcobo) kidnapped fiancée. “They are brothers. They feel for Qhawe, and they will go to any lengths to help him to find Naledi. Mqhele wants to bring her back for him, because he can see what Qhawe is going through. There’s also an extra push because Naledi is the doctor, who delivered his daughter and she helped Hlomu when she really needed her.”

While brotherhood and fatherhood reflects the best of Mqhele, his marriage tells a darker story. Stepping into Mqhele’s shoes meant coming to grips with a violent abuser who’s at war with himself. “As Wiseman, I always want to find the truth in the character I’m playing, which is not easy in a situation like this,” says Wiseman. “Mbali guided me to ensure that we were both comfortable [when things get violent].”

Man with a mission

Mqhele won’t get what he wants easily, this season. The man behind the kidnapping is Naledi’s own father, a Chief of the Royal Thabeng, who has promised her to another man. The Zulu brothers will start the season fractured despite all that Mqhele does to keep his family together. With Qhawe chained in a basement, and Sambulo (Sipho Ndlovu) freshly back from the dead, can Mqhele keep a level head? Hlomu’s life and little Mthaniya’s future depend on it!

Watch The Wife on DStv Compact

Mzansi Magic (DStv Channel 161) is available on DStv Premium, Compact Plus, and Compact. To upgrade your existing package, click here. Or if you'd like to Get DStv, find a service that suits your needs here.