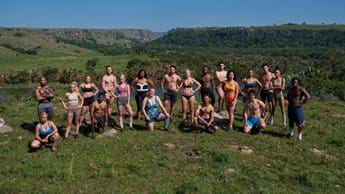 Just when the castaways think they have the game figured out, they are thrown a curveball that shatters their alliances and sends them into a tailspin, which makes Survivor South Africa S8: Immunity Island a thrilling watch.

We’ve now reached the merge point, and if you’ve been dragging your feet about getting into the game, the good news is that the episodes are all waiting for you right now on Catch Up.

Still hesitating about dipping your feet in the shark-infested Survivor waters? Read on for our quick round-up of some of the most influential moments and people in the game so far…

Welcome to the wild, Wild Coast

20 castaways arrived at the Eastern Cape coastlines to compete in the first-ever season of Survivor SA filmed on home ground. They were divided into two tribes: The green Zamba and orange Vuna.

To win the R1 million grand prize and bragging rights, though, the castaways are not only tasked with withstanding the treacherous weather conditions on the coast and its jungle conditions, but each other, too.

“What I like about this season’s cast is that everyone is so passionate about playing the game of survival for all its adversity and elements that make [the reality show] the greatest game on Earth,” says host Nico Panagio.

Throughout the season, the Zamba and Vuna tribes established strong alliances with their tribemates, but 2 tribal swaps, the first in episode 3 and the other in episode 6, stirred a stick in that hornet’s nest.

People who thought they had everything under control and the long game in their sights were forced to form new alliances or risk being booted off.

When original Vuna tribe member Wardah Hartley’s allies were booted off, she created an alliance with Tyson Zulu and Kiran Naidoo following the second tribal swap. But just when they thought they were safe, Vuna and Zamba were merged into the Osindile tribe in episode 8, forcing the trio to step up and blindside the Zamba OGs (originals).

What makes Immunity Island different from previous seasons is the “island” itself. After each challenge, the winner selects a castaway to be sent to Immunity Island, which grants that castaway an opportunity to play a game.

The game allows them to win an Immunity necklace or a reward for the impending Tribal Council. This unexpected feature has provided many with advantages, like in episode 5 when Anesu Mbizvo was awarded a Tribal Council Pass. This allowed her to pick either herself or another castaway to leave Tribal Council before the votes were cast.

But the most startling surprise was when both tribes attended Tribal Council in episode 5, despite Vuna winning the Immunity challenge.

At this point of the game, three Survivors have demonstrated outstanding strategy and gameplay. Go back to episode 1 and watch them lay their groundwork from the first moment…

At this point, Chappies is considered a threat and a liability. It isn’t because he is outspoken or physically strong.

Backstabbing Chappies has compromised most of his alliances. But he is a man of many tricks and after the merge in episode 8, Zamba OGs Marisha du Plessis, Nicole Wilmans, Shaun Wilson and Amy Eliason plotted his elimination, only for the Vuna OGs to unexpectedly save him minutes before voting.

The self-proclaimed “ultimate survivor fan” Renier has watched all the Survivor seasons from every franchise that you can think of. He has the playbook stored in his mind. He might come across as meek but he is a puppet master, who has instigated many downfalls. When Renier smiles to your face, it’s because 1 of his minions is standing behind you with a sword.

Anesu can be seen around the island laughing and chatting. She’s the cool, calm and collected yogi who is friends with both Vuna and Zamba OGs. But they should watch out! Why? Because Anesu is playing both sides, no one sees it coming when she plots and schemes.