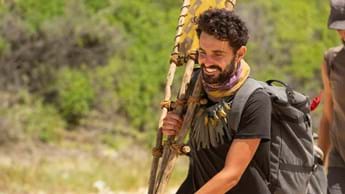 Return of the Outcasts consisted of 20 returning players from past seasons of Survivor SA, and Dino focused on building social capital from the onset. He forged strong bonds and played strategically, rather than being flashy. At the final Tribal Council, the Outcasts Jury decided that Dino played the best game this season than runner-up Shane Hattingh.

Known as one of Survivor SA’s puzzle masters, Dino’s highlights in season 9 of Survivor SA include forming the No BS alliance, with Phil Dickson and Felix Godlo, but he later betrayed them. He also won a brand-new Mahindra XUV300 in week four, and he picked up a luxurious boat cruise holiday, worth R80 000 during his Outpost visit on Day 32.

Below, Dino discusses his Return of the Outcasts journey, friendship with the No BS alliance, and his upcoming wedding.

If you missed the season, you can binge-watch Survivor South Africa: Return of the Outcasts on Catch Up.

Congratulations, Dino. How did you celebrate winning Return of the Outcasts?

Thank you. I hosted a finale viewing party for the cast, Survivor SA alumni and guests, including my friends and family. I was able to celebrate with the most incredible people.

Why did you decide to go into the final two with Shane and not Marian de Vos?

Marian is incredible, she is a phenomenal player. Although Shane is a fantastic player too, I felt my odds of winning would be better against him. I said in the game that the only person I owe anything to is my real-life number one, my fiancé Kirsten. I had to do whatever it was that I needed to do to bring it home.

Describe your strategy in Return of the Outcasts. How did your game differ from the one you played in your original season?

Going in, my strategy was built upon a few things. Firstly, I wanted to build strong social bonds because I genuinely love people, but also because it’s people who drive the game forward. Secondly, I took time to understand myself and my character traits because no matter how hard you try, this game exposes who you really are. [Knowing who I am] was important because rather than trying to change things about myself, I tried to see how I could better utilise my strengths and safeguard my weaknesses. Lastly, adaptability was key. The game is constantly throwing curve balls and it changes every second. Being able to change along with it allowed me to form new ideas, plans and relationships to get to the end.

Tell us about betraying the No BS alliance and forming a partnership with Marian. Why did you do that?

I have the most love and respect for Phil and Felix, but we also knew we would be each other’s biggest competition so we’d have to turn on each other soon. Our games were closely aligned and we would have fewer differentiating factors at a final tribal council. I also perceived them to be challenge threats that could easily win a final endurance challenge. Marian and I bonded in the game and were a serious threat to win the game. I aligned with her because I felt I could bank on her vote and her skill sets. We also had so much fun playing together. It is so tough to make the hard decisions, but ultimately those decisions are the ones that could potentially win the game.

Any lessons learnt this season?

I was this timid, bullied kid with low self-esteem that slowly built-up confidence over a period of time. I applied for the show and was rejected at early stages five times before being casted. This experience has taught me that perseverance, resilience and patience is worthwhile. I have also found a new, different confidence in myself and I am grateful.

I get married to Kirsten in just over a month. Our dream wedding and honeymoon is on the cards followed by a move to Cape Town. My focus can now also shift back to growing my business, HintHunt, which I absolutely love. I’m continuing to work towards my dream of representing South Africa in skydiving, so there’s a great deal of training in my near future. There will be an eye on any new opportunities which might present themselves. You will definitely see me staying close to Survivor, engaging with the community and eagerly supporting the franchises as the fan that I’ve always been.

M-Net (DStv Channel 101) is available to all DStv Premium customers. To upgrade your existing package, click here. Or if you'd like to Get DStv and find a service that suits your needs here.

Light up the night when you download up to 25 content titles with the DStv App this October.