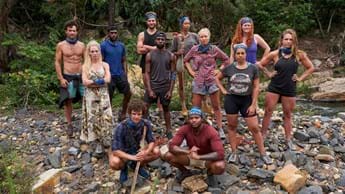 The 12 remaining castaways reached the halfway mark in the game, and the highly anticipated merge, in episode 8 of local reality competition Survivor SA: Immunity Island.

While splicing the Vuna and Zamba tribes offered some a chance to redeem themselves and an opportunity to salvage past alliances, the merge completely destroyed a core pact. Marisha du Plessis and her coalition were thrown a curveball that none of them saw coming. At the end of the episode, Marisha’s torch was snuffed to floods of tears and total disbelief.

But as with all Survivor back-stabbings and betrayals, Marisha’s ousting really didn’t come out of the blue at all. With all the season’s Survivor episodes still available to watch on Catch Up, you can track her downfall from day one and catch up on all those betrayals that are going to shape the second half of the game!

Usually, when host Nico Panagio utters the three dreaded words, “Drop your buffs”, it sends the castaways into panic as they are switched between tribes. But this time round, the call to unite Vuna and Zamba left the castaways grinning, especially Anela Majozi, aka Smash. He’d compromised his bond with his Zamba tribemates and Wardah Hartley was on a mission to send him packing. In essence, the merge offered Anele a lifeline as he reunited with his Vuna alliance.

The castmates were handed blue buffs and their new tribe’s name became Osindile. Translated to isiZulu, it means the one who has conquered or, simply, survivor.

A feast & some Chappies

To celebrate the merge, the castmates received a camp upgrade and were treated to a feast like no other. There was food in abundance, from a selection of salads and pastries to an array of meats, and to top it all off, there were jugs of gin and tonic. These castaways have been on the island for 19 days with nothing but plain rice and roasted coconut to eat, so this was heaven.

But while everyone was enjoying the buffet, Chappies Chapman was hungry for more. He went around the table, lifting plates and casserole dishes in search of a possible clue but he didn’t find anything. In all fairness, Chappies wasn’t off the mark as there was indeed a clue hidden under the table...he just missed it.

Eventually, Chappies threw in the towel on his treasure hunt and, realising that his former Vuna affiliates were on a quest to vote him out next, Chappies tried his luck by making amends and “emotionally connecting” with Wardah. He revealed to Wardah that Vuna received video recordings from their loved ones, following their challenge win in episode 7. However, sharing the information drove a deeper wedge between Chappies and his former Vuna tribemates as they’d all agreed that they wouldn’t tell anyone from Zamba about the footage.

The whispers around camp were that Chappies was on the chopping block. This set off his alarm bells and he raced about like a mad man, eavesdropping on people's conversations. And he searched all over the island for an Immunity Idol – using the fake clues that he received from Anele.

But Wardah, Tyson Zulu and Kiran Naidoo realised that if Chappies was eliminated, the “all powerful” ex-Vuna alliance – Shaun Wilson, Nicole Wilmans, Marisha du Plessis and Renier Louwrens – would emerge stronger, and they would be next on the hit list. To dismantle the alliance, Tyson devised a plot to save Chappies and vote off Marisha.

Although Tyson’s game plan was a success, this puts a target on his back. He might’ve played his Immunity Idol to save Chappies from elimination, but if previous episodes have proven anything, it’s that Chappies is loyal to no one…

Watch Survivor SA: Immunity Island, Thursdays on M-Net (DStv channel 101) at 19:30 or on Catch Up