What to Watch on DStv Access in December 2022 | Highlights 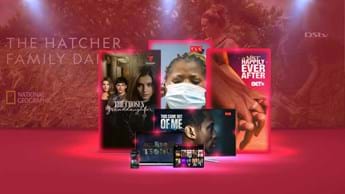 It’s time for a party and DStv Access has some families with a difference coming to make things exciting.

Gather the clan to watch a backstabbing, bickering and plotting in Telemundo’s (DStv Channel 118) sensational new telenovela The Chosen Granddaughter. For something sweeter and filled with family love, come down to the farm for National Geographic Wild’s (DStv Channel 182) new reality show, The Hatcher Family Dairy.

We have your guilty favourites, too. While the crackers, champagne and party are popping, grab your special viewing buddy for the Dr. Pimple Popper Season 5 Xmas Special.

Scroll down and mark your diaries for more new shows, and for a sneak peek at what’s happening in the other packages…

After Happily Ever After

Would you trust your ex to pick your next? Seven ex-couples join host, Bow Wow in his romance mansion, where they’ll be responsible for finding the perfect Mr or Ms Right at celebrity-studded singles parties. However, jealousy could revive an old spark when they bring the potential new love back to the mansion for 48 hours… to date their ex.

Five generations of the Hatcher family have run their small dairy farm in Tennessee, where Charlie and his brother, Jim are partners with their sister Lucy, who runs the farm tours. Charlie’s wife, Sharon manages the shops, and all the kids pitch in, including Charlie’s son, Charles who manages the milk delivery routes, and Jennifer, who’s also a vet.

The Roldán family matriarch, Sara (Consuelo Luzardo) introduces Luisa (Francisca Estévez) to her posh and greedy relatives. The matriach claims that Luisa is the daughter of Sara’s murdered youngest son, Sergio (Claudio Cataño). In a twist, someone behind the scenes is pulling the strings, using Luisa to take revenge on the Roldáns.

Over 500 000 patients visit clinics and hospitals every year in the US because they have something stuck in their body. From a pencil in the throat, to a stingray barb in the shin, or even a fake fingernail in the ear canal, this three-episode series follows the moment of extraction in real time. We’ll find out how patients got stuck, and why you shouldn’t just yoink something out.

This Came Out of Me Season 1

ER physician Dr Ruby Rose hosts this four-episode series, which covers everything from a patient with a glass shard in her eye, to a moth in the ear canal, and a toddler who’s swallowed their princess doll. But sometimes the body itself creates things that shouldn’t be there, like cysts, ingrown toenails, bone fragments from accidents, and painful abscesses, anywhere from the gums to the bottom!