What to Watch on DStv Compact Plus in December 2022 | Highlights

Celebrate the festive season with DStv Compact Plus 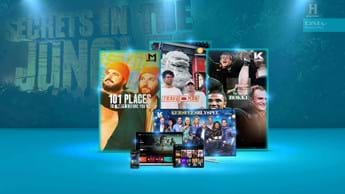 Have a holly jolly holiday break with DStv Compact Plus this December – you’ve earned it!

PS: Because you get to watch so much more on DStv with Compact Plus, check out other monthly highlights packages for news about December hit series like The Great British Bake-Off Christmas Special, Trevor Noah’s final episode with The Daily Show, and Edge Of The Unknown With Jimmy Chin, and much more.

BFF December on DStv Compact Plus

101 Places To Party Before You Die

From Maui to Moab, comedians and friends, Adam Pally and Jon Gabrus show just how much fun they can cram in. They tackle snorkelling, tuktuk rides, an ATV rainforest adventure, forging weapons, and horse riding to mention a few.

Richard Ayoade is determined to show us how to have the most “culturally efficient” Christmas possible… with friends. Richard and Jon Hamm tackle Hong Kong via helicopter. Later, David Baddiel and Richard walk in the footsteps of prophets for 96 hours in Jordan’s deserts. Also tune into Gadget Man’s Guide To Christmas on 25 December at 12:00.

Hamid Said hops on his motorbike and journeys around Hormozgan on the Persian Gulf to gather musicians for a concert that celebrates their African roots. Along the way, he’ll explore the area’s cultural practices and beliefs, including the healing traditions of Zar. Also watch Iran From Above on 31 December at 21:00 & 22:00.

This documentary spotlights 30 of the biggest names in South African rugby and what made them magic. Find out what the likes of Jean de Villiers, Breyton Paulse, Werner Swanepoel, Jannie du Plessis and Naas Botha have to say about being a Bok.

Willem Botha, André Schwartz, Stephanie Baartman and Early B sing beloved Afrikaans Christmas carols. While they perform, viewers get a fresh take on the original Christmas story. The script is written by Wessel Pretorius and the show is directed by André Schwartz.

Secrets in The Jungle Season 1

This one is for all the Indiana Jones fans! Scientists, including engineer Amma Wakefield, biologist, Rosa Vasquez Espinoza and geothermal scientist Andres Ruzo, use CGI, LiDAR technology and archive footage to see what has been swallowed up by jungles. Find out about Costa Rica’s Diquís Spheres, a unique fossil in Madagascar, and the glow in the dark mouse in Earth’s oldest tropical rainforest.

Also on Compact Plus this December

Check out the other highlights packages for more on these shows, which you will also be able to watch with DStv Compact Plus this December…