What to Watch on DStv Family in December | Highlights

Fun and festivities on DStv Family 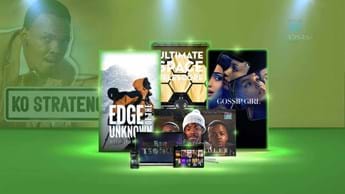 Are you ready for the annual festive lights? DStv Family is turning it on and turning it up as we light the night with shows in all shapes and sizes this December.

Gearheads, The Motoring Gifts Giveaway Show is back with huge prizes that include a drifting experience. New comedy series, Ko Strateng on Moja Love is cenetred around a widow, who uncovers unsettling secrets about her recently deceased husband. For something glitzy and glittery, we have the rebooted Gossip Girl.

PS: Because you get to see so much more on DStv Family, check out our other monthly highlights packages for news about December’s hit series like brand new dating reality series, After Happily Ever After with Bow Wow, new telenovela The Chosen Granddaughter, and more.

It’s the most wonderful time of the year! Race to your phones, motoring fans, watch your favourite shows and get ready to enter. This year’s amazing giveaways include a Ferrari simulator experience for two, an XS Promotions Drift experience fo two, a VW Advance driving course, double tickets to Passion For Speed, Allen Dent artwork, and all kinds of hampers and swag.

Msingethe “Dimples” Ngubane (Mfana Jones Hlope) sets off a shocking chain of confrontations when he falls into an abandoned water tank and dies, leaving his financial affairs in disarray in the dramedy series. Now his dependents are coming to his widow Connie (Amanada Quwe) for money, including the children he had by cheating on her and others he was supporting, like his mistress, Nono (Nelisiwe Morifi).

Constance Billard, the snobbiest private school in New York City’s Upper East Side has a new queen bee: influencer Julien Calloway (Jordan Alexander). She connects with her her estranged half-sister Zoya (Whitney Peak), are opposites in every way, but they have one thing in common: they both want Obie Bergman (Eli Brown), the “prince” of the school. Gossip Girl (voiced by Kristen Bell) is here to spill the tea on their triangle.

Have you been scammed? This dramatic docu-reality series brings us real-life cautionary tales from people who were charmed and manipulated by those who wanted to cheat them out of cash and treasured items. Re-enactments show what the scammers did behind their victims’ backs, how they laid their traps, and the warning signs they gave as they strung people along.

Edge Of The Unknown With Jimmy Chin

Watch Edge Of The Unknown With Jimmy Chin Season 1 from Sunday, 25 December at 21:00 on National Geographic (DStv Channel 181).

This Hindi romantic drama spans generations. Growing up, Lakshmi’s mother dies of pneumonia because her family can’t afford medical treatment. Lakshmi is 21 years old when her childhood crush Arjun returns from his studies in the UK pretending to be another man. The two marry, but the relationship is haunted by Arjun’s ex-fiancée, Saumya.

Also on Family this December