How to get more DStv with DStv Connected Explora 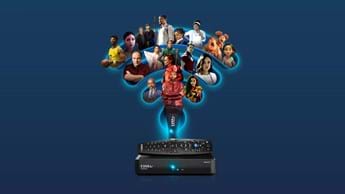 Did you know your DStv Explora has hidden powers? Just connect Explora to the internet and you’ll instantly have the power to see more! That’s More Box Sets, More Movies, and even streaming service Showmax at your fingertips. It’s the power of Connected Explora.

Set up your Connected Explora

Connect using and ethernet cable or your home Wi-Fi, and your Explora will step you through the process of setting up the connection when you select Connectivity Set Up in the System Settings menu, using the blue DStv button on your remote.

NB! Depending on the nature of your data connection, some data charges might apply.

Get data deals with DStv Internet

If fibre hasn’t come to your neighbourhood yet, but you’d like to enjoy the full, awesome power of your Connected Explora, have a look at the special internet deals available to you as a DStv Subscriber. There’s a range of DStv and DStv Internet combo packages to suit your pocket.

DStv is making it easier for you to find Box Sets to binge, too. Simply open Catch Up on your internet-connected DStv Explora or via the DStv App, click on the TV Shows tab then select Box Sets and browse the titles on offer. Here’s a tiny sneak peek at what you can binge on DStv with your Connected Explora.

Ready for some old jokes? This American adaptation of a British sitcom stars Niecy Nash, Laurie Metcalfe, Alex Bortsein and Mel Rodriguez as workers at a run-down hospital caring for the elderly.

Binge Getting On Seasons 1-3 as Box Sets on DStv Catch Up until Thursday, 21 July

The ultimate gangster drama to take you inside everyday Mafia lives, with the late James Gandolfini smashing it out of the park as New Jersey-based Italian American Mafia head Tony Soprano.

Binge The Sopranos Seasons 1-6 as Box Sets on DStv Catch Up until Sunday, 17 July

Church scandal? Led by host Nimrod Nkosi, AmaBishop’s roundtable of experts is here to ask why. Go inside the real-life sex and abuse shockers, gender bias and scams, and see how the panel confronts Pastor Zondo.

Binge Amabishop Season 2 as a Box Set on DStv Catch Up until Sunday, 26 June

DStv adds to its archive of movies every day. Along with a library of classics that you can search by genre you’ll also be able to catch the new releases on the M-Net Movies channels (Channels 104, 106, 107 and 108), along with martial flicks on KIX (DStv Channel 114), and classics on Studio Universal (DStv Channel 112) and TNT (DStv Channel 137).

Need a sniff of the popcorn?

Bring the tissues for this heart wrenching drama. Grieving and desperate divorced dad Thami (Kagiso Modupe, who self-funded this 3-year labour of love) sends his life into chaos when he kidnaps his daughter Lerato (Tshimillo Modupe) from her school.

The Croods: A New Age

Cavemen family The Croods are looking for the perfect place to call home after their previous cave was turned into a lava field. And they just might have found paradise, but it’s already inhabited by an “advanced” family called The Bettermans.

Watch The Croods: A New Age on DStv Catch Up now via M-Net Movies 1 (DStv Channel 104)

In 1984, Wonder Woman (Gal Gadot) is living as museum curator Diana Prince, while performing heroic acts undercover…until an artefact grants her wish to be reunited with her first love, Steve Trevor (Chris Pine), before it falls into the wrong hands.

DStv Subscribers from Compact Plus to Access get the latest series and movies on Showmax each month – at literally half price – with a Connected Explora. Look out for…

This Showmax original sci-fi series focuses on game developers trapped within a real-life version of the game they were working on, after an electromagnetic pulse bomb fries every circuit in their high-rise office building.

Living The Dream With Somizi Season 5

Catch up with Somizi’s life since the back half of 2021. Nothing is swept under the rug, including his split with his husband, Mohale, Mohale’s abuse accusations, and the death of Somizi’s mom, actress Mary Twala.

This escapist sports drama brings laughter and larger than life characters to the court. The series starts in 1979, when the LA Lakers Basketball team were just meh – until players like “Magic” Johnson (Quincy Isaiah) punched up the theatrics.

Writer-director James Gunn (The Suicide Squad) is behind this superhero comedy series, which shows what happens when Peacemaker (John Cena) returns home to claim his freedom…with his eagle sidekick, Eagly.

Six of the most glamorous women in Lagos, Nigeria are taking us behind high walls and closed doors to show us their lives, their city and their ambitions in this reality show. This has been a Twitter fave, so prepare for drama.

Binge The Real Housewives of Lagos Season 1 on Showmax now