ADD Movies to your DStv package for just R99 this November

From Bollywood to blockbuster action! See the world in dazzling colour when you Add Movies for only R99 this October! 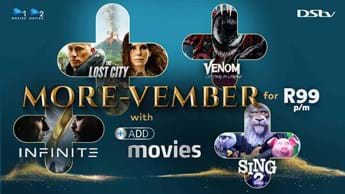 DStv subscribers on Compact Plus, Compact, Family and Access packages get access to premium movie channels M-Net Movies 1 (DStv Channel 104) and M-Net Movies 2 (DStv Channel 106) this November, for just R99. All you have to do is ADD Movies to your DStv Package, and you’ll get more laughs and stories to enjoy.

It’s Family Time 7 days a week, at 7pm on M-Net Movies 1, with specially selected comedy, animation, musical, adventure and romance films. Jason Isaacs is Dracula, Matthew McConaughey is a singing koala, and Daniel Radcliffe is Loretta? M-Net Movies 1 is where the stars go to play! If it’s action you’re after, there’s Blockbuster action all the way on M-Net Movies 2 with the latest films fresh from the cinema.

ADD Movies is the Premium movie-going experience, no matter which DStv package you’re on. You can enjoy up to 300 movies a month, including the latest releases from the biggest studios. Whether you love blockbusters, award-winning dramas, animation, comedy, fantasy, action or adventure, they’re all here.

Each month, ADD Movies features customised movie curation with themes and festivals to get you in the mood. You can also have it all to yourself or share because ADD Movies is available to watch across multiple devices, whenever, wherever. It’s an uninterrupted movie experience, zero ad breaks.

Keep reading to see what’s to come this November when you ADD Movies.

The Croods: A New Age

Animated comedy. The Croods, their pets, and Crood daughter Eep’s (Emma Stone) new love, Guy (Ryan Reynolds), are looking for the perfect place to call home after their previous cave was turned into a lava field. They stumble across the sophisticated and snobbish treehouse dwelling Bettermans, and while struggling with the Bettermans’ efforts to break them up, the Croods also have to navigate some bizarre prehistoric animal politics.

Buster Moon (Matthew McConaughey) and his group are working to make the big time in this animated comedy. While they’re preparing to put on a show in Redshore City, they court elusive rock star Clay Calloway (Bono) to perform with them, in the hope that the collaboration will impress entertainment mogul Jimmy Crystal (Bobby Cannavale), owner of Crystal Records.

Everyone gets lonely during the holidays, including Count Dracula (Jason Isaacs). Thanks to a magical wish, he transforms the regular suburban Wishbone family into monsters and then tries to help them get back to their human form…while hiding the truth about who he is in this animated comedy.

Live action sci-fi romantic comedy. In the year 2049, Walt (Cole Sprouse) the barista applies to enter the Kovi Industries Student Mars Program, but is rejected 37 times as he has nothing to recommend him aside from a vague feeling that space is cool. Chaos ensues when he charms a brokenhearted student named Sophie (Lana Condor) to sneak him onboard with her.

In this comic book action sequel (written directed by James Gunn, who also wrote and directed Guardians Of The Galaxy) to the 2016 Suicide Squad film, a new group of convicts – including Idris Elba as Bloodsport and John Cena as Peacemaker – agree to join a task force on a near-certain death mission to destroy a giant, alien starfish named Starro The Conqueror in a secret lab founded by Nazis. If they survive, they’ve been promised reduced sentences.

Sci-fi action directed by Antoine Fuqua (The Equalizer and Training Day). At a police station, a man named Bathurst (Chiwetel Ejiofor, with Rupert Friend playing the 1985 version) claims to have known a recently arrested schizophrenic man named Evan McCauley (Mark Wahlberg, with Dylan O’Brien playing the 1985 version) for centuries. They are part of a group of about 500 people worldwide – known as The Infinites – who can remember their past lives.

This action adventure from Ruben Fleischer (director of Zombieland) is based on the computer game of the same name. Treasure hunter Victor Sullivan (Mark Wahlberg) recruits Nathan Drake (Tom Holland) to join his expedition to find the fabled Magellan Expedition Treasure in a race against billionaire Santiago Moncada (Antonio Banderas).