The Queen’s star-crossed hearts in August on DStv 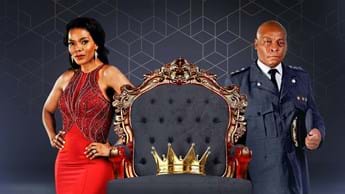 What happens when sworn enemies become lovers and they’re forced to hide their affair – not only because one party is married but because their families are at war, too? That battle sets the stage for disaster between the Sebatas and Khozas in the Mzansi Magic (DStv channel 161) telenovela The Queen this August. And it’s not the only heartache on the horizon…

While Hector Sebata (Rapulana Seiphemo) and Harriet Khoza (Connie Ferguson) are sneaking around with their sordid tryst, Goodness (Zenande Mfenyane) and Kagiso’s (Loyiso MacDonald) marriage reaches breaking point after one too many arguments. For both of these romances to survive, tough decisions will be made, families will clash, and hearts will be broken.

Harriet wears many hats: She is the matriarch of the Khoza drug empire, a proud mother, and a self-proclaimed Queen. But there’s one role that she’s ashamed to play in public – Hector’s mistress.

Only when no one is looking will she kiss Hector, the very man who put a hit on her entire family in July after Harriet mistakenly murdered his daughter, Mpho (Ntando Duma).

As the month progresses, Harriet comes to her senses and she tries to dump Hector, but he refuses to end the affair. Despite his marital status, he can’t bring himself to end their special bond and stolen moments. As flattering as it is for Hector to let his guard down and tell Harriet that he is falling for her, she is aware that resuming their affair is too risky. There is far too much tension between their families. Rather than sending him a break-up mail or calling him to end the affair, though, Harriet follows her heart and continues with the cheating.

Word of warning to Harriet: Hector’s wife, Vuyiswa (Zandile Msutwana), is an acclaimed detective, and it won’t take long for her to figure out the betrayal. It’s safe to say that all hell will break loose, and Hector will regret kissing Harriet.

Goodness is ready to check out

The Khozas just can’t catch a break. They deal with one crisis after another, and it’s no different in August as Harriet’s son Kagiso’s marriage is crumbling.

After the shootout and hostage situation, Kagiso’s wife, Goodness, no longer feels safe living in the Khoza mansion with their infant daughter, Mvelo. Goodness suggests that she and Kagiso get as far away from the Khozas as possible, but he shuts her down. This leads Goodness to pack her belongings, grab Mvelo, and move in with family friend Patronella (Thembsie Matu) while she’s house hunting.

If Kagiso wants to protect his marriage and be a part of his daughter’s life, he’ll have to go along with Goodness’s decision to move to the Eastern Cape.

With Zandile Msutwana reprising her role as detective Vuyiswa, the first thing that the detective does is to investigate the Khoza shooting. Little does Vuyiswa know that digging for answers will only lead to bitter truths that she’d prefer not to uncover.

The man she loves is behind the shootout. What lies behind the investigation will put a strain on Vuyiswa's marriage for good.