Enemies/lovers in The Queen S6 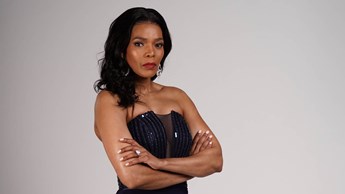 It’s an unexpected start to the new season of Mzansi Magic (DStv channel 161) telenovela The Queen on Monday, 26 July… And oh, it gets even crazier!

Within a few days of making amends, Hector and Harriet develop feelings for each other and start to hide their affair from their family, resulting in an even bigger war between the Sebata and Khoza clans.

Calling it a draw

When Hector discovered that Harriet was responsible for his daughter Mpho’s (Ntando Duma) murder in mid-July, he sought nothing else than to avenge her death. Hector and his daughter, Thando (Jessica Nkosi), enlisted a dozen hitmen to infiltrate the Khoza house.

While the men assassinated the Khozas’ security guards, Hector snuck into Harriet’s bedroom intending to first confront her, then kill her.

“I’ve been at odds with you, but I’ve never involved any of your loved ones. You killed my daughter, Harriet,” said Hector, pointing his AK47 to Harriet’s chest. “I came to kill you.”

Sparks fly between Hector and Harriet

To Hector’s surprise, Harriet didn’t break into a cold sweat and beg him to spare her life. Instead, she revealed that she inadvertently killed Mpho as payback because he murdered her daughter, Kea (Dineo Langa), in July 2020.

She suggested that they call it a draw and start on a clean slate. “I’m already dead, Hector. I died the day you killed my daughter. So go ahead, finish what you’ve started,” said Harriet.

Hector couldn’t bear to pull the trigger. The rivals sat on the floor beside each other as they connected over their grief. In that instant, sparks began to fly.

The Queen S6: a tortured love

Hector and Harriet go into S6 of The Queen convinced that they are soulmates – each other’s equal. They’re family-orientated, they’re widowed, and they live life on the edge. Sounds like a perfect match, right?

Well… While their love story reads as though it’s been ripped out of a romantic novel, there is an issue: Hector is a married man.

Aside from the danger of Hector getting caught in a love triangle in S6 of the Queen, his daughter, Thando, will be on a quest to kill the Khozas.

Unlike her father, Thando refuses to forgive and forget her enemies. She will stop at nothing to seek retribution for her sister Mpho’s death.

As the plot thickens

With Thando trying to get rid of Harriet and the rest of the Khozas, Harriet’s daughter-in-law Goodness’s (Zenande Mfenyane) parental instincts kick in and she will consider leaving town to protect her infant daughter, Mvelo.

The last time that Goodness and her husband, Kagiso (Loyiso MacDonald), tried to buy a house in the Eastern Cape, Harriet convinced the couple to stay because she wanted the family to live under 1 roof. But the S5 finale’s shooting proves to Goodness that the Khoza mansion isn’t safe.

Furthermore, it was reported in May this year that Loyiso would be leaving The Queen. Will his exit storyline involve Thando killing him, or will he skip town with Goodness? Watch and see.

Back with a bang

When Hector’s wife, Vuyiswa, makes a return to The Queen this season, Zandile Msutwana will reprise her role.

The actress was briefly replaced by Thembisa Mdoda following Zandile’s injury on set. And Vuyiswa won’t take kind to the fact that her husband has eyes for another woman.

All the pieces are in play on the storyboard. But as always in this sort of game, the most cunning piece remains The Queen.

What’s your next move, Harriet?