Watch The Queen S5 on DStv

Vuyiswa takes charge in The Queen

Thembisa Mdoda-Nxumalo talks about what Vuyiswa will do after she realises that her new husband, Hector, killed 2 men in her life: Thato and Jerry. Watch it all play out in The Queen S5, weekdays at 21:00 on Mzansi Magic (DStv channel 161). 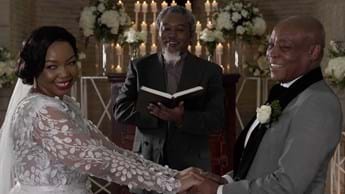 What should be a blissful time for headstrong detective Vuyiswa (Thembisa Mdoda-Nxumalo) following her recent shotgun wedding with her colleague, Hector (Rapulana Seiphemo), has turned into a complete nightmare in Mzansi Magic (DStv channel 161) telenovela The Queen. Now the bride wants vengeance, and her quest is going to topple Hector’s throne of lies.

Vuyiswa’s happiness barely outlasts her honeymoon in late May. Shortly after she learns that Hector is a drug dealer, she realises that he might also be responsible for her waiter nephew Thato’s (Xolani Mayekiso) fatal car accident – which happened when Thato was on his way to stop Vuyiswa from walking down the aisle into a killer’s arms, and to expose Hector for the corrupt cop that he is. Sadly for Thato, Hector and his daughter, Thando (Jessica Nkosi), got wind of Thato’s and the father-daughter duo killed Thato before covering their tracks.

Vuyiswa and her team found no evidence of foul play at the scene, and they declared Thato’s death to be the result of an unfortunate car crash. Vuyiswa climbed into her marriage bed at the end of her work day, unaware that she was sleeping right next to the man behind the crime. So she was devastated in the final week of May when Thato’s bestie, Siyanda (Cindy Mahlangu), made accusations against Hector. But as much as Vuyiswa might want to stand by and defend her man, things start adding up to create a horrifying picture that she cannot ignore.

“At first, Vuyiswa is confused and a little offended because she’s a good cop and she prides herself on [solving cases],” says Thembisa. Like a dog with a bone, though, Vuyiswa goes searching for answers – and be warned: She is leaving no stone unturned.

From June, Vuyiswa’s quest to place Hector in handcuffs and in a prison cell will be filled with plenty of hurdles and unsettling truths. Apart from Hector constantly distracting Vuyiswa from her investigation, the detective will also get to the bottom of her former husband Jerry Maake’s (Shona Ferguson) death in July last year.

Vuyiswa is about to learn what’s had fans of The Queen so horrified while watching her romance with Hector play out. Her husband was the man who sent a bullet to kill his business rival, Harriet Khoza (Connie Ferguson), so that he could run the Tembisa drug ring without any competition. However, Jerry took the hit on Harriet’s behalf and he died on the spot. Days later, Hector was promoted to Jerry’s position at the police station. Despite his guilt (surprise, he has a conscience after all), Hector later fell head over heels with Vuyiswa and they both declared their undying love for each other.

So it’s safe to say that it’s going to break Vuyiswa when she finds out that Hector ruined her fairytale romance with Jerry, explains Thembisa. “Falling in love again after losing Jerry wasn’t easy. [Finding out that Hector isn’t the upstanding man] that Vuyiswa believed to be is a huge bomb in her face. As a cop, she has so many questions. As a woman, she really doesn’t want to believe [the allegations].”

By mid-June, Vuyiswa will have a breakthrough in her case, and nothing is going to stop her from taking Hector down. With a court case at hand, their crumbling marriage will be the last of the newlyweds Hector and Vuyiswa’s worries.

And Uncle Kgosi is back!

The Queen is packing a punch in June. Besides Vuyiswa’s digging, Harriet’s flamboyant brother and fan-favourite, Kgosi (Sello Maake Ka-Ncube), makes a shocking return. He arrives with his fabulous style in check and loads of baggage. As in the past, the siblings will partner up to get Kgosi out of trouble. But with all the drama in Harriet’s life, like as her son, Kagiso (Loyiso MacDonald), scheming to skip town with his wife, Goodness (Zenande Mfenyana), will she have enough capacity to rescue Kgosi?

Keep watching the crowned Queen of SA’s telenovelas to find out.

The show must go on!

PS: Vuyiswa isn’t 2-faced. Thembisa has temporarily replaced Zandile Msutwana as Vuyiswa after the latter was injured on set and has been booked off to recover. It has been a wild ride for her! “It’s magical. Initially, it was tough because everything happened so quickly. I landed in Johannesburg fresh from filming Mzansi Magic’s talent reality competition, Old Mutual’s Amazing Voices, and went straight to the set of The Queen,” explains Thembisa, who adds that her cast made it seamless to adjust. “Everyone on set was so welcoming and supportive. I’m having the time of my life and it can only make me a better actress.”

When asked about her highlight on set, Thembisa reveals that it’s her scenes with Rapulana. “He is professional to the core, but we joke around [during the takes]. I’m extremely grateful for the opportunity to do what I was born to do, which is storytelling. The production company, Ferguson Films, saw something in me, which was to take on such a mammoth task [of standing in for Zandile]. It is always a great feeling driving home knowing that I have left everything on set: each tear, emotion, and laugh. I absolutely enjoy working with individuals who love and cherish what they do.”

Mzansi Magic (DStv channel 161) is available on DStv Premium, Compact Plus and Compact. To get DStv or to upgrade your package, click here.