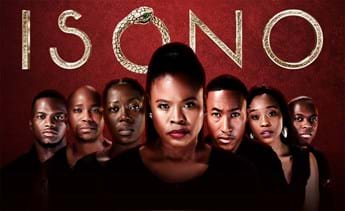 The wait is over! BET’s (DStv 129) first-ever daily drama, Isono, hit our screens on 28 September packed with suspense-filled storylines that will have us on the edge of your seats every Monday to Thursday at 19:30. From characters that you’ll hate to love to a great soundtrack, Isono transports viewers into the dark and twisted world of Mary Ndlovu (Nthati Moshesh) and her complex family. Buckle up, it’s going to be a wild ride.

Get in on the action

This means that more valued DStv customers can enjoy the start of this new hit show. Watch BET (DStv 129) from 28 September.

Keen to upgrade your DStv package so you can enjoy BET and more awesome channels all the time? No problem – simply click here to Get DStv today.

Translated in isiZulu, Isono means sin, and the daily drama links one of each of the 7 deadly sins – lust, gluttony, greed, sloth, wrath, envy and pride – to each of the main characters. For instance, Mary is so evil, she might as well embody all the deadly sins except for sloth because she isn’t lazy or afraid of hard work. But her main theme is greed, as she is so ruthless, she’d do just about anything to maintain power and influence in her community.

“There are a lot of themes explored on Isono such as love, redemption, sacrifice and duality of characters,” says writer Mahlogonolo Mahapa. “We take a closer look into the double lives that these characters are straddling, the good and the bad. More than anything, the daily drama is centred around family. What makes a family? Is it blood, seeing that Mary has only given birth to her daughter, Esther (Didintle Khunou), and she adopted Gabriel and Simon (Bohang Moeko and TK Sebothoma)? Mary handpicked a family that serves her needs, and we’re going to unwrap all their interactions,” she adds.

Have you seen this show on Catch Up? Well here are 7 reasons to click watch it now…

It’s not afraid to go there

In the opening scene, Gabriel is in a warehouse chopping up a corpse, as per his dear mother Mary’s request. His white overalls are covered in blood stains, and he is somewhat disgusted by his actions. In that moment, Gabriel is certain that he no longer wants to continue being his mother’s puppet. The young man wants out of the gang. “While the daily drama follows the evil matriarch Mary, it also chronicles Gabriel’s journey – a son who’s on a mission to escape his mother’s grip. Isono speaks on corruption and the lengths that people would go through to protect their secrets,” explains Bohang.

Secrets are the name of the game

Speaking about secrets, in the world of Isono, keeping skeletons in the closet is a norm. Apart from getting rid of his mother’s adversaries, Gabriel is also hiding his sexuality from his loved ones. He had a brief fling with his adoptive brother, Abednego (Senzo Radebe), who also grew up at Mary’s orphanage House of Grace but moved out of town years ago. Gabriel is practically living a lie and with time, his lies and secrets will begin to eat away at his conscience. And that’s to say nothing of the entire graveyard of skeletons in Mary’s closet. We’re honestly surprised that there’s even room for her hats in there anymore.

Dubbed “the Devil in the Sunday hat”, Mary is a philanthropist by day and a gangster by night. She’s bold and in charge – the next anti-hero that we never knew we needed. Mary isn’t the usual female lead who wears her heart on her sleeve. She isn’t vulnerable or sympathetic. You’ll hardly see her softer side, showing that women can be every bit as complex as the male anti-heroes on TV. “Mary has very few redeeming qualities. I love uncovering her dark side. It’s important that I don’t judge her decisions. Mary will do whatever it takes to ensure that her empire goes smoothly, and she’d get rid of anyone who stands in her way. Is she right? That’s for you to decide. But for Mary, it’s the best decision to make,” declares Nthati.

The only time that viewers will see Mary letting her guard down somewhat is with her adoptive sister, Jumima (Rami Chuene). They met at an orphanage when they were teens, and they’ve never left each other’s side. Mary would go to the ends of the Earth to protect intellectually disabled Jumima. “Their sisterly bond comes to the forefront,” says Rami. “Jumima is the one character who knows Mary like no other. She keeps all of Mary’s unsettling secrets. Their relationship isn’t perfect, but they love each other dearly.”

When it comes to a whirlwind romance, Isono has plenty of it. Apart from Gabriel and Abednego’s complicated love life, the daily drama also focuses on Esther and her soccer star boyfriend Makwande (Anga Makubalo). When we meet them, they’re head-over-heels with each other but as time goes, their relationship is strained by her excessive drug use and his secrets, and they’re eventually driven apart.

Isono writers also explore the gruelling music industry. Since Esther is in a band that’s about to break out, the show delves into the pressures that musicians face. “At every point and time, we’ll be translating issues that are happening in society. We’re going to give some of the topics a fantasy-spin to reimagine what goes on in these dark worlds,” explains Mahlogonolo.

Besides the star-studded cast, actors like Khulu Skenjana, who plays gang leader Gazati and Jo-Anne Reyneke, as pastor’s wife Angelina, take on the supporting roles. “Viewers should look forward to a great ensemble that bring a dynamic performance. Everyone brings their own spice to the pot, and it’s great to see how it all mixes together, which makes for an incredible show,” says Bohang proudly.