She who holds the secrets

She who holds the secrets 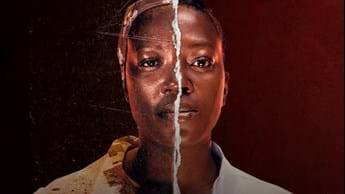 It’s only 6 days until the long-awaited local telenovela Isono airs from Monday, 28 September on BET (DStv 129) at 21:30. If you’ve seen or heard anything about the leading lady and cunning philanthropist Mary Ndlovu (Nthati Moshesh) on social media or billboards, you’ll know that she’s a force to be reckoned with.

Mary feeds the hungry and takes in the homeless at her orphanage House of Grace – and she does all this dressed to the nines. But when the sun sets, she exchanges her tilted church hat for something a little more daring: a balaclava, as she leads one of Vosloorus Township’s most dangerous gangs, who’re always preoccupied with getting rid of a dead body.

There’s one person who knows where Mary has buried all those many corpses that she’s been collecting over the years – and it’s not her protégé adopted son, Gabriel (Bohang Moeko); it’s her adoptive sister, Jumima, aka Juju, played by Rami Chuene. “Unlike Mary, Juju is warm and welcoming. The sisters run House of Grace together, but Juju tries to distance herself from Mary’s savage lifestyle – which isn’t always easy,” notes Rami.

No matter how hard Juju tries, Mary always finds a way to involve her in her underhanded dealings, causing strain in their sisterly relationship. Here’s what you need to know about Juju ahead of the premiere of Isono…

When we’re introduced to the world of Isono, you’ll notice that Mary is snappy and rude to just about everyone, except Jumima. That’s because they share a bond like no other, explains Rami. “The women met at a shelter when they were just kids, and they leaned on each other for most of their childhood. They promised to protect each other no matter what, and they’ve kept their word because Jumima and Mary are inseparable,” adds the actress.

As teenagers, Jumima and Mary escaped the shelter hand-in-hand following a tragic event that scarred Jumima for life. “The next thing you’ll pick up about Jumima while watching Isono is that she’s intellectually disabled. It’s as if her brain hit the pause button after the traumatic experience,” says Rami. Throughout the drama, Mary constantly tries to shield Juju from any harm. “Even when Jumima let’s one of Mary’s secrets slip, Mary doesn’t get angry or kick her out. She simply talks to Jumima in a calm manner, something that she never does with any of the other characters.”

Getting the lowdown on Juju

When Mary walks into a room, all the orphans straighten up and they are immediately on edge. Jumima, on the other hand, plays hopscotch with the kids and finds a way to put them at ease. “She loves spending time with the children because they don’t undermine her like the adults do,” says Rami. “People tend to either write off or dismiss the intellectually disabled. Instead of shutting them out, we should listen to them because they too have a voice – and Jumima is proof of that.” Jumima runs her own little garden and she makes extra money from recycling cans. “She is resourceful and extremely self-sufficient,” says Rami.

Rami admits that Jumima is worlds apart from her past characters, like Gracious from telenovela The Queen, who she played from 2017 to 2020. Jumima is more dressed down. We’re talking no make-up, no wigs and weaves, and certainly no fancy outfits. “It’s very refreshing to play a character like Jumima as I’m forced out of my comfort zone,” says Rami. “I love that viewers will see me in a different light. What I enjoy most about Jumima is that she’s completely different from any woman that I’ve ever portrayed. She’s innocent and laughs a lot. You won’t be getting a catty remark from her, which is what most of my previous roles are known for,” explains Rami.

Get in on the action

This means that more valued DStv customers can enjoy the start of this new hit show. Watch BET (DStv 129) from 28 September.

Keen to upgrade your DStv package so you can enjoy BET and more awesome channels all the time? No problem – simply click here to Get DStv today.