You’re spoilt for choice this month on DStv Family. Don’t miss out on these new and returning shows. 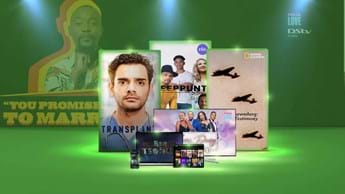 Whether it’s a reality show that follows couples, who are struggling to revive the spark in their romance or a thrilling documentary, there is something for the entire family to enjoy on DStv Family this January. Go on a journey of love, history, and explore the world around you with these fascinating series.

PS: Because you get to see so much more on DStv Family, check out our other monthly highlights packages for news about January hit series like the brand-new telenovela Gqeberha: The Empire on Mzansi Magic (DStv Channel 161) and gripping drama series Lioness returns for Season 2 on M-Net (DStv Channel 101).

What to expect on DStv Family this January

You Promised to Marry Me

What happens when your partner vows to get down on one knee and get married to you but you still haven’t walked down the aisle yet? Well, people who wish to be the bride or groom finally confront their partners and ask them the question: “Why are we still not married?”

Nazis at Nuremberg: The Lost Testimony

This once-off documentary features never-before-seen footage and testimony from the Nuremberg trials. It brings the past to the present by offering a new perspective on one of the most significant events in modern history.

Watch Nazis at Nuremberg: The Lost Testimony on Sunday, 29 January at 21:00 on National Discovery (DStv Channel 181)

In Keerpunt se Bestes, viewers follow some of the best true stories of ordinary people’s dramatic experiences and how they changed their lives. Don't miss these stories that might just inspire you.

The medical drama series follows the lives of doctors and nurses at York Memorial Hospital. This season explores Bash’s (Hamza Haq) conflict at work and with his loved ones, June’s (Ayisha Issa) trouble with her new roommate, and the trouble that brews at the emergency room.

Lovey Dovey: Until When?

The spin-off show is centred around the lives of the winners of the original Lovey Dovey dating series. Get a front-row seat to Lindiwe and Justice’s romance as well as the runners-up, Nonhlanhla and Keke. Which couple will survive?

Also on DStv Family this January…