Marciel’s heart finds its own match 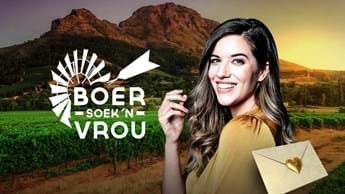 Presenter Marciel Hopkins (28), who plays Cupid to single farmers in the reality show Boer Soek ’n Vrou, has found her love life running parallel to that of the series…

“I got engaged on 24 July 2020 during pre-production, and I’m getting married on Saturday, 9 April, when the current season ends,” she smiles. And because she’s walked this road herself, it makes her task of leading the contestants down their own path towards true love so much easier.

The heart of every season

Marciel believes there’s more than 1 reason for the popularity of Boer Soek ’n Vrou. “The show is very different from other romantic reality series like The Bachelor and Love Island, because the contestants in these series are chosen beforehand by the producers. Boer Soek ’n Vrou is more unpredictable because there’s no control over who’s going to write to the farmers,” she explains. “The show also touches the hearts of South Africans because it reflects our culture, our language, an authentic way of farming, and gives a glimpse into rural life. And many of us – even men – are suckers for a good love story.”

Marciel, who studied drama at the University of Stellenbosch from 2012 to 2014 and then completed her honours degree in psychology, made her mark as a model, both locally and internationally, from a young age. Versatile Marciel also has a passion for acting. In 2013, she played the role of a student in the kykNET series Die Boland Moorde, and last year she played Chloë in the movie Klein Karoo 2. Last year, she was also in the short film In Die Middel Van Nêrens Merraai on kykNET.

Her debut as TV presenter came in 2020, when she became the sixth presenter of Boer Soek ’n Vrou. “With the previous season it was a huge challenge because the Covid-19 protocols were still very strict. I’m a people’s person, and I couldn’t meet the farmers on their farms – I had to meet them via Skype and introduce them to the viewers.”

“With the current season, it’s a lot easier. We still adhered to the Covid-19 pandemic regulations, but at least I could meet the farmers in their own environment, where they flourish.” Marciel and the production team travelled more than 10,000km across the country to the different locations to capture the contestants’ stories on camera. “Luckily, with my modelling work, I became used to being away from home for long periods of time,” says Marciel. With the previous as well as current season, there was a record number of entries. “I think the COVID-19 pandemic made it more difficult to meet people and the show encouraged people to write in.”

During the filming of season 14, Marciel has become more comfortable in front of the camera, too. “Where in the previous season, I thought I should be doing this or that, now I’m less critical of myself,” she says.

In fact, she’s so at ease with herself on screen now that she and her new fiancé, Handré Lourens (31), a financial manager in Cape Town, like to watch the current season together. “He’s very supportive of my career,” she adds. And falling in love herself has helped Marciel to guide the farmers to their own love.

Marciel is also a life coach and regularly hosts motivational talks about self-love and body positivity across the country. “My experience in this field makes my job so much easier when I have to give the farmers advice on matters of the heart. But as presenter it’s not my job to tell them what choice they should make. They have to accept responsibility for their choices.”

Her participation in the Miss South Africa competition in 2015 has also stood her in good stead in her task as presenter. “I understand high-pressure situations, and I have empathy for the ladies who are exposed to this competition element, as well as the many interviews that the contestants have to do.”

Now Marciel is excited about the day when she becomes Mrs. Hopkins-Lourens. “I grew up in Paarl and Handré in Worcester, and we’re also getting married in the Boland,” she reveals. It’s a place close to their hearts. The couple met each other in 2015 in Franskraal when their respective families were on holiday there. “I believe love conquers all, and I’m holding thumbs that the farmers in the current season will also find true love like Handré and I have.”

The popular kykNET series Boer Soek ŉ Vrou has proven for over 14 seasons that it has a success recipe for finding love. Now the show is looking for the next harvest of single farmers who are looking for love.