Expect the unexpected from DJ Zinhle 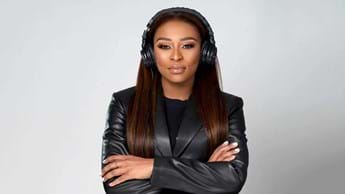 When multitalented club DJ, Ntombezinhle Jiyane, better known as DJ Zinhle, took to social media in August this year to announce her new reality show DJ: The Unexpected, the socials promptly exploded in excitement. Viewers weren’t only thrilled that they’d get insight into Zinhle’s life – in the trailer, the DJ is shown informing her fans that she’s pregnant by rubbing her belly, which was certainly unexpected!

And that was just the beginning. In the reality show, fans follow Zinhle while she builds her business empire, which includes an accessory brand and wig company, among other projects in the pipeline. Zinhle also juggles motherhood as she raises her 6-year-old daughter Kairo. She navigates her romance with her musician partner Bongani “Murdah Bongz” Mohosana, and she’s seen hanging out with her celebrity besties actress Pearl Thusi and television personality Nomuzi “Moozlie” Mabena.

“I’ve never wanted to be part of a reality show. However, I wanted my second pregnancy to be different. I wanted to enjoy it with my loved ones and still share the experience with my fans,” explains Zinhle.

Zinhle chatted with us about the behind-the-scenes details on The Unexpected, and what life has been like since she gave birth to her daughter Asante in September.

How has your life changed since giving birth?

It has been chaotic. Clearly, I forgot what it’s like to have a newborn in the house. Bongani and I aren’t getting enough sleep but it’s worth it. The baby is amazing. She is the cutest thing, and we’re all obsessed with her.

You’ve been fairly private before. What were some of the key discussions that led to you bringing fans inside your life in this show?

The main objective with the reality show was to have control over my pregnancy. While I was nervous to lift the curtain on my life, it felt like the right thing to do. I believe that documenting my pregnancy is a great opportunity to tell my story in my own way, and to let people into my life on my own terms. At the same time, as a mom, I was looking forward to filming the reality show for my child. In future, I’d like her to see everything that I was experiencing while she was still in my belly.

When you raised the idea of filming a reality series about your life, was there anyone close to you who wanted to opt out?

Not at all. Secretly, my friends and family have always wanted me to be part of a reality show! When I revealed that I was going to star in my own series, they were more than eager to start filming. I appreciate their support and I’m glad that they’ve joined me on this journey.

How did you explain to Kairo what would be happening with filming The Unexpected, and how did you check in with her about her comfort throughout the shooting day?

Kairo is used to having cameras around, so that wasn’t an issue. I simply reminded her to be herself, and she was on board. You’ll notice that she isn’t in all of the episodes and that’s because we avoided overwhelming her with the production crew following her everywhere. Nonetheless, she’s happy to see herself on television.

What aspects of your life and your home were still out of bounds and why?

When I watch The Unexpected, I’m shocked at how far we went. There were no bars held. I live my life in an honest and fearless way, and I didn’t hide anything about my life – I’m an open book. The one thing which people have been reacting to is that in some scenes, I’m barefaced, without makeup or wigs. And that’s how I look when I’m at home, relaxing in my living room or exercising. The Unexpected is as real as my life gets.

Another aspect which has resonated with viewers is your stance on marriage. You reveal that you don’t have intention to get married…

I have never had any ambitions to get married but should there be a time where I meet someone, whom I love and connect with – which is now – I might change my mind. When I get married, I’d like the person and I to be on the same page. I don’t want to get married because our families demand that we should or because we’re pressured into marriage.

What do you think people have learnt about you since The Unexpected started airing?

That I’m a laid back, yet hardworking, and relatable woman. I stand for women empowerment, and I constantly fight for my dreams. I’d like viewers to know that success is attainable, because it is. They should tackle each challenge as it comes.

What advice would you give viewers about life and entrepreneurship?

They should free themselves from societal expectations of what a perfect life looks like. They shouldn’t compare themselves to anyone and most of all, they shouldn’t strive to impress other people – their lives and decisions should make them happy.

When the news of my pregnancy broke, there were people who said: ‘Zinhle is having another child with a different “babby daddy”. That’s crazy and unacceptable’. My response was: In your world it’s crazy, but in my world it’s absolutely acceptable. I’m strong-willed and I know what I want for my life. I won’t let people make me feel guilty about my choices. I’d like women to know that they can have control over their lives and that they can achieve anything they put their minds to.

BET (DStv channel 129) is available on DStv Premium, Compact Plus and Compact. To upgrade your existing package, click here. Or if you'd like to Get DStv, find a service that suits your needs here.