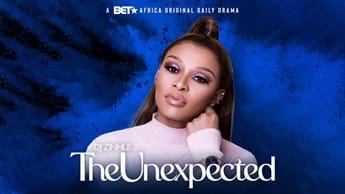 It is the year of black women at BET Africa (DStv channel 129), and the channel recently announced the launch of its fourth female-led local reality show featuring one of Africa's most inspiring and celebrated superstars popularly known as DJ Zinhle.

The reality show titled, DJ Zinhle - Unexpected, is set to reveal all, send shock waves and celebrate black excellence when it premieres Saturday, 18 September at 19:30 on BET (DStv channel 129). The series follows DJ Zinhle as she breaks the news of her pregnancy to her siblings, her mother and close friends. Zinhle is supported by her close friends Pearl Thusi and Nomuzi Mabena.

The multitalented club DJ, business mogul and TV personality is a highly influential woman serving nothing but black girl magic in the music and lifestyle industry with hits like “Umlilo”, multiple awards and accolades from platforms such as Oprah Magazine, Glamour, Forbes, and Bona magazine. DJ Zinhle - Unexpected will give viewers a glimpse into the DJ’s life from business to motherhood and so much more.

“This year, in celebration of trailblazing black women across the globe and at home, BET Africa is proud to showcase black girl magic with yet another female led reality show. We are proud to share more of DJ Zinhle’s journey with viewers across the continent,” said Monde Twala, SVP and GM for ViacomCBS Networks Africa, Peer Lead, BET International. "Since its inception, BET Africa has been dedicated to showcasing black excellence and culture in various forms and spheres. The series is set to showcase and spotlight the real life of yet another African entertainment powerhouse.”

This year's theme “The Year of The Black Woman” is in full effect as BET Africa continues its commitment to showcase and uplift black women spotlighting their amazing achievements.

Superstar DJ Zinhle said, “I’ve never wanted to do a reality TV show however this time around, I wanted my pregnancy to be different, and I wanted to enjoy it with those who I love closely but still have the opportunity to share the experience with my fans later. I’m super excited to share my experience now and partnering with BET Africa has allowed me some control in my narrative. It gives everyone a closer look into who I am, as a businesswoman, mom and public figure, which I think my fans are going to appreciate.”

DJ Zinhle – Unexpected local reality series will not only entertain, as fans get to witness, in pivotal behind-the-scenes moments in the life of the award-winning entertainer. The debut season of the reality show is packed with lots of surprises and fans are in for a treat, as in weeks to come, an unexpected reveal would be shared.