Ron Iddles – The Good Cop S1 | Watch it on DStv

The Good Cop’s Ron Iddles is ready to listen 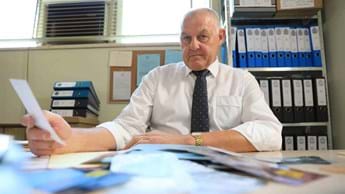 True crime fans, if you love to get to the heart of how cops solve their cases, try an episode of the new CBS Justice (DStv channel 170) series The Good Cop. Think of one of those illuminating “interrogation” scenes in a top-notch crime drama that seems to bring the whole case together. Now imagine seeing that in real life. No tricks, no lies, no intimidation or threats of violence.

Or just read on, because DStv spent a little time with The Good Cop’s retired investigator Ron Iddles, talking to him about his interview technique – how he set the stage and established a connection with his subject, and how he listened.

“Part of the interview technique came out of the UK. It's called the PACE method. It's about proper preparation. Engagement (emotionally connecting with the subject). Getting the account (of what happened) and checking the account. And evaluating. We've adopted that in Australia. It's about having an open mind, because people sometimes lie for genuine reasons. That doesn't implicate them in the crime. It's about being able to listen and not going in there with a preconceived idea. You should let the facts guide your investigation, rather than if I have a theory, and I manipulate the facts to fit the theory. I've seen that across the world where investigations go wrong,” says Ron.

As a case in point about forcing facts to fit the theory, CBS Justice viewers might remember the wrongful imprisonment and convictions in the recent broadcast of The Night Caller.

“I got rid of a table, right? For me, a table is a barrier to communication,” Ron insists. “In the past, we've always had two detectives in the interview room. But there's really no reason because if you're recording it on video, and everything is open and transparent, you can see what's going on. In the end, I was doing interviews on my own. So, when we're interviewing, it's about picking the right person to do the interview.”

Once he’s set the scene, Ron will then establish rapport in a really simple way. “I might start an interview and say, ‘It's 2 o'clock in the morning, I've been up all night, would you like a cup of coffee?’ Nine times out of 10, they say no. So (I’ll say) ‘You know what, John, I can't continue unless I get one. Would you want one?’ (and they’ll say) ‘Okay!’ Then you sit there and you have a cup of coffee together. You're sharing something. And that's about building a bond.

“All I want to do in that interview room is create an environment where the person, if he so desires, can tell me the story, as he knows it.”

In talking to people involved in murder cases, Ron took pains to present himself as someone who’d be understanding rather than judgemental. “There's two things that cost nothing: The ability to listen, and the ability to understand,” he says. “It's about just having that conversation, and trying to give them opportunities to tell a story. If you come in a different way, where you say, ‘Well, I know you killed your wife,’ all of a sudden the shutters go up because they've got nowhere to go. So, it's about saying to them, ‘Look, I don't know the whole circumstances, maybe what's happened here is not actually a murder, it's a lesser charge.’ And I might say to them, ‘Share your story with me, because you're an adult, I'm an adult.’ If it's a guy, I might say, ‘There's nothing in this world that two grown men can't work out’. It's appealing to their emotions.”

“The key to that is being genuine in your empathy. Because if you're not, they're going to pick it up, and you won't get anywhere. I've had situations where suspects, prior to telling me what they've done, have broken down and cried. Now I'll move over, and I'll put my arm around them. It's about building rapport and being genuine, and not making a judgment about them.

“It's not good cop, bad cop. It's just about understanding human behaviour.”

Ron is there to listen, but he emphasises that it’s a slightly different skill set to the one we use for listening socially. “Listening is a skill. And it does take time. On average, police around the world will interrupt the suspect every seven seconds. That's pretty well known and documented.”

“A good way to show that you're listening is to summarise what they've told you: ‘So what you told me is at 11 o'clock at night, you went into their house with a knife, and then you stabbed your partner 10 times. Is that so?’ Now, if I haven't listened properly, they'll correct me.

“And I might take notes and put in some key topics. Eventually I'll come back and say, ‘Okay, you told me you went in the house. Tell me about that.’ Now, when you ask it again, you'll get 20% more information than you got the first time.”

“The best way to conduct an interview, it's really like a conversation, rather than question-answer, question-answer. I call it a free narrative. Then when we get to the point where I have evidence to the contrary, I would say, ‘A short time ago, you told me that you weren't at that house. Is that so?” Now I want to show you some closed-circuit TV, which shows you walking into that house. Can you explain that to me?”

CBS Justice (DStv channel 170) is available on DStv Premium and Compact Plus. To get DStv, click here.