Crime & punishment in The Night Caller on DStv

The Night Caller series director, creator and editor Thomas Meadmore gives us the chalk outline of how he created the show’s twisty plotline 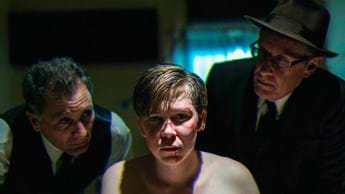 True crime buffs have some detective work ahead of them in the new CBS Justice (DStv channel 170) 4-episode true crime series The Night Caller.

Series director, creator and editor Thomas Meadmore takes us on a dangerous, atmospheric journey into the past to the years 1958-1963 when serial killer Eric Edgar Cooke’s 5-year crime spree – which included rape, murder, vehicular homicides and assaults, and assassination-style shooting – confounded police.

Political pressure and the nature of police work at the time led to the arrest and framing of 2 innocent men, John Button and Darryl Beamish, via false confessions achieved through violence, coercion and intimidation. It allowed the killer to keep escalating, and left a sleepy community in Perth, Australia, reeling in terror.

The Night Caller draws on the work of investigative journalist Estelle Blackburn to expose the truth about the police investigation and exonerate Button and Beamish. It includes fascinating first-person interviews with members of the community, survivors of Cooke’s attacks, John Button himself along with his family, Eric Cooke’s widow Sally, people who lost family members and friends to the Night Caller, and even retired detective Max Baker, who was on the case from the beginning and was the first member of the police to hear Cooke admit to the killings.

Through clever structuring and editing, The Night Caller sets the stage to help us realise how everything went so horribly wrong in the investigation, and why it took so long to free Button and Beamish. It slowly turns into the story of a crime within a crime – 1 in which the perpetrators not only walk free, but remain in a position of trust and power to this day.

Thomas spoke to us about how he came to create the series, and how he brought the story together.

How did you come to make a series about The Night Caller?

Thomas: The idea came to me when I was on a trip back to Perth in 2018 with my wife. I was introducing her to family friends for the first time. And we were in the area where these crimes happened. It’s an area that both my parents grew up in. My dad's friend said, “You should make a film about Eric Cooke.” It reminded me of these urban legends that my parents would tell me growing up, about the fear that overtook them when they were kids, when these random killings were occurring. It connected to me on this level of, “What if we told this story of this community that is severely traumatised, and terrified by this person who was a mystery, and who no one could catch – because that's what my parents were.

“I set off from there to reach out to Estelle Blackburn, who played an integral role in investigating some of the miscarriages of justice (in the Night Caller case). I reached out to John Button, 1 of the community members who spent time in jail for killing his girlfriend at the time (Rosemary Anderson). And I reached out to the serial killer’s wife, Sally Cooke. When I reached out to Sally and was able to talk to her, that really solidified what the series was going to be about. I was expecting her to say, “I don't want to know about it.” But instead, she said, “What do you want to know? I'll tell you, whatever you want to know.” It just completely opposed my expectations and I thought, “Oh, this woman is brave. She is an example of accountability. She's standing strong and happy to not shying away from this horrible thing.” So that's where we started.

Tell us a bit about your background research for the show and into Eric Cooke.

Thomas: I was lucky, because the research was done. Estelle Blackburn, she wrote this book (Broken Lives, published in 1998), which is a comprehensive volume of everything that this guy did. There are a few other books that cover this subject as well, so it was really a case of getting an overview of the events that occurred, studying all of these books. The additional research that I did on my own was I travelled to every single location where anything happened. And I took it all in and thought, “Okay, well, what did actually happen here?” I walked through it all myself and got my own sense of the place. It was in talking to loads and loads of community members and getting their own personal testimony that I started to gather my own perspective on it, which was around the collective trauma. That process was extensive. I got my own angle and my own sort of point of view on the story. And then and from that, plotted and wrote the angle of the story that you see in the film (series).

The people in question

What happened during your first in-person meeting with Eric’s widow, Sally Cooke (who died in October 2019)?

Thomas: I was so nervous because I so, so wanted to interview her. I was excited about meeting her and I didn't want to offend her in any way. I was just so nervous so I was really friendly. And I remember her just saying, “Love, come in.” She's from Liverpool. She said, “Come in, I'll make you a cup of tea.” So I came in with all my crew and she just made us all tea. We set up and sat down and she said, “All right, then.” She held up this knitting – she used to knit squares for charity to make into quilts – she started knitting these squares and she said, “What do you want to know?” And we just chatted about her family, who she's immensely proud of, and we got along really well. She had a great time. So it was a really lovely day.

Thomas: But you didn't see any of the other Cooke family in the film, did you now? They all have their own process with it. They've all got their own relationship with it, I think. While the Cooke family do – certainly Sally Cooke was able to – stand tall and talk to you about it, I don't think it was easy for them. I don't think it came without immense difficulty or immense difficulties throughout their lives that they have to deal with. My impression of everybody who experienced something in this is that everybody was deeply traumatised. You've got to look at Sally in a different light. You've got this stigma around their family. And she did manage to create this family of citizens who are great contributors to the community. In that light, it is pretty incredible. Whereas John Button was never able to really recover.

At the end of it all

What sort of feedback on the series have you gotten from the people of Perth?

Thomas: Oh, really positive feedback from people of Perth. They are thrilled to see their story up on the screen like this. The people who are in it have been immensely moved by it, and I've had amazing feedback from them. It's brought up all sorts of feelings and emotions for John Button and his wife, and his daughter absolutely loved it. I haven't heard anything from the Cooke family at all. A lot of young people had no idea about the story. It was pretty cool to be able to bring it to them.

CBS Justice is available on DStv Premium and Compact Plus. To upgrade your package or to get DStv, click here.

Guess The Dress, OPW: The Remix and Wawu, That’s My Dress: Kenya are reinvigorating Wedding Bliss