Ron Iddles – The Good Cop S1 | Watch it on DStv

Going undercover with Ron Iddles on The Good Cop 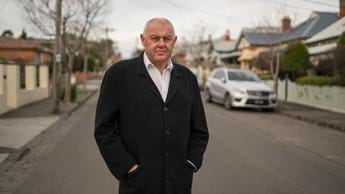 In 2016, journalist and author Justine Ford published a biography of veteran Australian homicide detective Ron Iddles. Titled “The Good Cop”, it looked back over 25 years of his career, working on 320 homicide cases, as one of one of Australia’s most successful investigators. It now forms the backbone of the CBS Justice (DStv channel 170) true crime series of the same name.

“I wasn't sure that I actually wanted a book written,” admits Ron. “But then I thought about it and thought, ‘Well, it's great for my children, great for my grandchildren. It's all condensed into one book.”

So, when Australian broadcaster Foxtel approached Ron a few years back to involve him in making a series based on the book with Justine onboard as Executive Producer, he was keen. He went on to spend six months filming episodes based on six cases in which he was the lead investigator. And thanks to Ron’s extraordinary compassion and integrity in dealing with both the victims’ families and the accused, major figures in those cases agreed to appear in the series.

What was one of the most important discussions that you had with the executive producers of The Good Cop, Andrew Farrell and Justine Ford?

Ron: I think one of the most important things was, I'm not an actor, I have to be myself. And I was allowed to narrate the story in my own way. I'm just telling a story of someone's loved one who doesn't have a voice anymore. I become the voice for the victim, but also the voice for the family. I think that was why, to some extent, it was probably natural and accepted well by the public.

How were the cases for the show selected?

Ron: We selected six from the book. Two were what we'd call cold cases. So, one was a little girl from 1982, Bonnie Clark. Her father had come to me some 30 years on (after her murder) and said, “Listen, I'm dying of cancer, would you have a look at that?” That was a fairly compelling story. Another one was a 16-year-old girl who was stabbed multiple times and left on the side of the road. We solved that because a young journalist (later) came to me and wrote an article, and 35 years on I eventually charged someone. Two of them were high profile, well known within the southern state of Victoria, in Australia. And there was one that was unsolved. So, it was a bit of a mixture, but I always like to have at least one unsolved, because there's someone out in the community who always has the answer.

Ron and Justine got an extraordinary number of people to agree to be in the series, on the strength of not only Ron’s conduct during the investigations, but his care in maintaining relationships with so many of the people who’ve come through his hands over the course of his career.

“Some of the people who are involved are journalists, some are barristers, one's a retired judge. We approached each of the families of the victims. And two of the people that are actually involved are accused,” reveals Ron. “One of the cases relates to the murder of three people as a mafia killing. There was a young lady, Judy, who went to jail for about three years as an accessory. And we kept in contact right up until the time of the series. She wanted to be involved, which was good.”

“Another one was somebody I charged. And even when I charged him, I thought to myself, ‘Maybe he hasn't done it.’ I went and saw the Director of Public Prosecutions and we agreed to withdraw the charge. In the end, I proved his innocence, but he'd spent 18 months in jail. And he wanted to be involved in it. He said to me, ‘Ron, I've done some bad things. So let's call it square, the 18 months that I've done in prison for the things that I haven't been caught for,’ and we shook hands and, again, we've kept in contact.

“For the family members, I think it was reasonably cathartic. In Australia, you're allowed to make a victim impact statement. Sometimes that's two or three pages that, after the person is convicted, is read to the court. But they don't get to say certain things. By having them involved in this series, they were actually able to speak at length – especially Bonnie Clark's mom. The original investigators blamed the mother. And for her, it was a really good experience to be able to express in the series, what it was like to be accused of killing your own daughter when she hadn't done it.”

CBS Justice (DStv channel 170) is available on DStv Premium and Compact Plus. To get DStv, click here.