Reyka: Strong women on & off camera 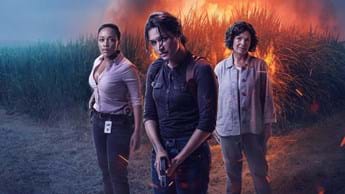 The second episode of M-Net’s (DStv channel 101) South African original crime drama series, Reyka S1, had us gasping as new revelations came out about Reyka’s (Kim Engelbrecht) complicated dynamic with Angus Speelman (Iain Glen), the man who kidnapped, groomed and sexually assaulted her as a child, as well as the serial killer she is now hunting as a criminal profiler.

In Reyka, we saw a girl and a woman pushing back against men who had enormous power over her, some of it held by violence, some institutionalised.

In flashback scenes we saw young Reyka (Gabrielle de Gama) as Speelman’s captive, sleeping in a bedroom with a locked security gate that was only opened in the morning when she awoke. When a clearly unhappy Reyka pleaded with Angus to allow her to call her mother on her birthday, he told her, “Reyka your mother is not looking for you, she doesn’t want you. Everything out there is a threat to us. They don’t understand our love…”

Back in the present, Reyka was pushed to support her superior Brigadier Hector Zwane’s (Hamilton Dhlamini) theory that the 6 victims found in the cane fields were the handiwork of hitmen and not a serial killer. She reluctantly told the police commissioner, “That it’s a credible theory,” even though she didn’t believe or support it.

In that moment, Reyka walked a fine line to maintain her integrity while not upsetting her boss. And having glimpsed her childhood, viewers can start to guess why Reyka might have needed to be extraordinarily subtle in her attempts to appease authority while resisting it.

It’s part of a crazy rollercoaster Reyka is riding between Speelman pushing her to retract her statement to the parole board so that he can get out of prison, and Zwane pushing his own agenda to keep the “peace”.

Reyka is spiralling, but at the same time she is still in control and portrays an encouraging strong a woman navigating the men’s worlds around her.

Subtlety and strength in Reyka

Reyka isn’t the only woman standing her ground in the show – something that adds to the success of this new series, which has captured audiences’ attention in Africa and around the world.

Reyka’s mom, Elsa Gama (played by Anna-Mart van der Merwe) is also not someone to be messed with. And then there is the formidable Constable Nandi Cele (Thando Thabethe), Forensic Detective Alia Sewsunker (Leeanda Reddy) and Portia (Nokuthula Mavusa), who is Speelman’s wife. All of these women are strong in their own ways. They capture the iron fist in a velvet glove that women often have to wield to get ahead.

Strength behind the scenes

Reyka isn’t only empowering women on screen. Off screen, series producer Serena Cullen (from Serena Cullen Productions) fought tooth and nail for nine years to get Reyka made, with executive producer Harriet Gavshon (from Quizzical Pictures) and director Catherine Cook who also put their hearts and souls into the project.

“I think all of the female characters in Reyka on and off the screen have elements of that strong, beautiful Reyka within them,” says Kim. “They all have this thing that drives them to make a difference in the world. Not everything will go as they planned, but that doesn’t deter them from trying again, and fighting for justice.”

What is a strong woman?

Kim has a deep appreciation for how women are portrayed in Reyka, as well as the women behind the production. “When it comes to being a strong female, you don’t need to be fierce and authoritative to make an impact – you can be soft and gentle, flawed and funny,” Kim told DStv in a recent interview.

“Every single female in this show has a nuance to them. Reyka is very feminine, she shows all sides of femininity, and so does Nandi, Elsa, Portia and Alia. Whether they choose to act hard or soft, they show what influence women can have even in situations that are dark and hard to understand,” she adds.

With Serena, Harriet and Catherine behind the scenes, Kim says she felt elevated and part of something special. “Often women are seen as secondary characters in productions, but that is not the case here. Women are on the frontline and in the centre of the narrative, and that makes things so much more exciting and unique.”

What will Reyka and the other strong women do to get justice? Watch the eight-part crime thriller series to find out.