There’s so much Afrikaans lifestyle to love this April on VIA (DStv channel 147), from weddings in a flash to Minki’s Easter meals 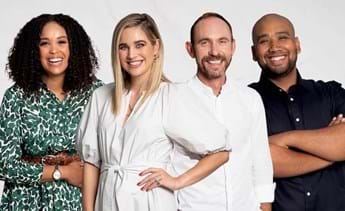 Ahh the month of April, you have finally arrived with your public holidays, Easter weekend, chocolate bunnies, eggs and best of all: All the new DStv shows we’ve been eager to see ever since the teasers started in March.

VIA (DStv channel 147) never disappoints when it comes to new content. But this time, the Easter basket is really stuffed full!

Here are the top 10 shows you just can’t miss this month – and 7 of them are brand-new!

VIA’s new April shows are full of personality, from Minki to Alvin Bruinders and Gerhard Steyn, to Jo Black and Herman Lensing. No matter what your favourite flavour is, there’s something to tempt your TV palate. Fall in love with these new series about cooking with love, learning healthy eating habits, talking about what it means to be a modern man, and even weddings that must happen in a “japtrap”.

The man with the long black beard, deep voice, and founder of the “Be That Guy Braai” movement now has his very own talkshow! Jo Black is getting even more real than he already is with his famous guests, such as the fellow singing sensations Demi-lee Moore and Refentse. He’ll be taking on them an adventure to get to know them better. Driving in a sleek Lamborghini and skydiving is just the tip of the iceberg when it comes to his plans… Get ready for a talkshow on a different level. Watch from Tuesday, 20 April on VIA (DStv channel 147) at 20:30
Watch VIA

The tall chef from the Northern Cape, Herman Lensing, is back with another cooking show, and this time he invites you to a special masterclass in whipping up delicious, time-saving meals. In each episode, Herman will demonstrate how to make 3 mouth-watering and easy-to-make dishes, each of which can be prepared in 30 minutes or less, giving you more time to enjoy these meals with the people you love. Eat your heart out, Britain – you may have Jamie Oliver, but we’ve got our Herman! Watch from Wednesday, 21 April on VIA (DStv channel 147) at 17:00
Watch VIA

Actress Reandi Grey (Elizabeth Price in M-Net (DStv channel 101) telenovela. Legacy) presents this show in which couples finally get the chance to make it to the altar. The Eendag producers provide everything, from the venue to the catering, but there’s a catch: The couple must plan the wedding themselves and they only have 1 day to do so. They start the day making all the necessary arrangements for the wedding and by that afternoon, they should be at the altar. Can you get a dream wedding organised in 1 day? Watch from Wednesday, 21 April on VIA (DStv channel 147) at 20:00
Watch VIA

This 1-off delight presented by Minki van der Westhuizen is full of ideas for your Easter meals – all made with a little Woolworths convenience (shh). Yolani Abrahams packs a picnic complete with watermelon pizza. Clement Pedro’s dinner plan include a chocolate marshmallow jaffle, and the big Sunday meal is prepared by Jacques Erasmus of the restaurant Hemelhuijs. You can expect total decadence from the last 1 – complete with a leg of lamb and a cake topped with chocolate eggs and bunnies. Watch from Thursday, 1 April on VIA (DStv channel 147) at 15:00
Watch VIA

Pure, unadulterated eye candy for garden lovers. This docuseries will take viewers on a tour of the most breath-taking, incredible gardens in South Africa. From lush outdoor spaces, to the rugged beauty of rock gardens, this show is a feast for the eyes – and will have you making ambitious plans for your own patch of soil. Watch from Thursday, 22 April on VIA (DStv channel 147) at 16:30
Watch VIA

It’s time for the kids to shine! In this heart-warming programme, toddlers of South Africa get the opportunity to tell their stories, sing their songs and tell us about what they learnt at school. Cuteness overload! Watch from Tuesday, 20 April on VIA (DStv channel 147) at 18:30
Watch VIA

What better way to lose some kilos than with your best buddy by your side to encourage you? Especially when the cravings kick in! Best buds Alvin Bruinders and Gerhard Steyn, beloved co-presenters of the fast-food lifestyle show Konings Van Kitskos, are ready to take on the weight loss challenge in Skud Dit Af. Former Miss South Africa and TV personality Melinda Bam is the host of the show, and will help the guys make a lifestyle change to be healthier and have some fun along the way. Watch from Tuesday, 20 April on VIA (DStv channel 147) at 17:00
Watch VIA

Minki van der Westhuizen returns with an 8th season of her much-loved talkshow where she interviews a guest – whether they are a celebrity or an ordinary person – with an incredible story to tell. Plus, she surprises her guest with someone with whom they have a special connection. Minki works from a space of deep empathy, so every interview is guaranteed to be packed with tears, laughter and inspiration. Watch from Monday, 26 April on VIA (DStv channel 147) at 20:00
Watch VIA

Just when you think this 105-year-old magazine can’t shock you! Huisgenoot: Ware Lewensdramas S6 had us on our toes when it ended with the case against Shrien Dewani, a man accused of arranging his wife Anni’s murder on their honeymoon. With S7, the series will kick things up a notch and focus on the kidnapping of Zephany Nurse and the murder of Jayde Panayiotou. Watch from Monday, 12 April on VIA (DStv channel 147) at 21:00
Watch VIA

Foodies Marinda Engelbrecht and Alvin Bruinders are back again for the popular potjiekos competition show, Laat Die Potte Prut, in which teams compete against each other by preparing a 3-course meal by only using a potjie-pot. As presenters and judges, Marinda and Alvin have their job cut out to crown the potjie champion, but a famous face guest judge helps out each episode to keep things fair. Watch from Friday, 23 April on VIA (DStv channel 147) at 17:30
Watch VIA

Sign up with the DStv app, a free service for all DStv subscribers. With the DStv app, the same channels you watch on your decoder at home are available for you to stream online or on your mobile device wherever you are.

ZooMoo (DStv 314) is available on DStv Premium, Compact Plus, Compact and Family until 31 March 2021.