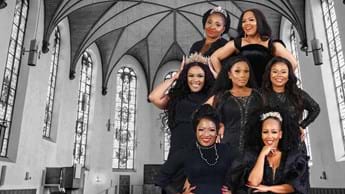 A brand-new season of PASTORS’ WIVES premieres on Sunday 31 July at 21:00 on (DStv Channel 173). The popular HONEY TV reality show follows the lives of seven pastors’ wives from different walks of life. Each wife deals with the dramatic trials and tribulations of modern life as a religious woman. From Nandipha Mlombi’s on-and-off fights with the other wives, Phume Khethang’s battles with traditional spirituality and her Christian faith, and Anietie Ezeimo’s attempts to fit into the larger group — this group of women is coming back spicier and more set in their ways.

Season two saw the addition of three members to the cast — businesswomen Judy Ranoto and Tshidi Motlhose, alongside gospel star Noluvo Duna. Relationships started off cordial as Ranoto and Duna melted into the group dynamic. Motlhose however, quickly became the odd one out, but all that changes this season. “The wives return to face a few tests to their enduring relationships and faith,” says Valentino Mathibela, Show Producer. “Their parenting is put to the test as some of the pastors’ kids make their own choices growing up and drifting from their parents’ faith. The return of Innocent to the new Season draws clear lines on friends, enemies and frenemies.”

Innocent Sadiki re-joins the cast, having stood out as the “it girl” in season one. Sadiki, alongside her pastor husband, were the talk of the social media chatter for their authenticity around sex, marriage problems and being a modern couple. “I’m excited for the world to see the true and real Innocent Sadiki” she says. “The preacher, influencer, actor, entrepreneur, and mother. I’m excited to inspire every young and old pastors’ wives out there.”

"We're hoping that viewers are finally comfortable with each of the wives, know their personalities and can have fun with them this time around," says Zinzi Velelo, HONEY's Head of Content. "There are no holds barred this time around, so we're excited for what they have to offer."

HONEY (DStv Channel 173) is available on DStv Premium, Compact Plus and Compact. To upgrade your existing package, click here. Or if you'd like to Get DStv, find a service that suits your needs here.