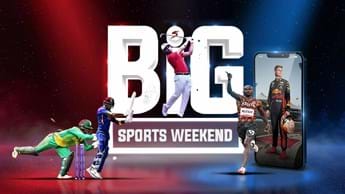 Got a Sports Dad? An Adventure Dad? The Dad With All The Jokes? No matter which model dad has lovingly been installed in your house, DStv has a show that’s sure to please him this Father’s Day weekend, from Friday, 17 June to Sunday, 19 June. We’re talking Big Dad Energy, 24-7!

Read on for a glimpse of what we have in store to get six of the major models of dads watching happily… and for a peek at what else is in store for all Dads this weekend and coming soon on DStv.

They’re out in nature hunting, climbing, running, surfing, fishing, canoeing, biking, hiking. Time off is time outdoors for these active dads. These are dads with Everest dreams, even if the budget only stretches to the end of the street. (Not to be confused with sports dads).

Adventurer Chris Horsley is a guide and expedition leader for scientists and film crews working in active volcanoes. In this series he’s on a mission for fun and for science as he climbs to the rims of volcanoes, from Africa's Great Rift Valley to Central America's Volcanic Arc, to install early warning systems.

Who drank the last of the milk? Who left the light on? What do you think you’re doing? There’s no beating Detective Dads’ keen nose for child crimes. Distract those instincts for a moment with a cop drama series or mystery on DStv!

We Own This City Season 1

David Simon and John Pelecanos (creators of The Wire) bring us a new story from Baltimore’s mean streets, this time based on Baltimore Sun reporter Justin Fenton’s true crime book on the rise and fall of the Baltimore Police Department's Gun Trace Task Force. Watch it for Jon Bernthal’s (The Punisher) epic performance as Sergeant Wayne Jenkins.

Watch M-Net now Watch We Own This City now

Curious Dads are standing behind you as you do your homework, reading ahead in your textbooks. If you’re on holiday with a Curious Dad, you will be visiting the closest museums, and if he whips out his phone, he’s not snapping selfies, he’s looking up facts!

Story of The Spitfire

The Spitfire has been flying since March 1936. For years plane spotting South African dads could recognise its distinctive engine sound, look up and give it a salute as it flew overhead (a restoration project for SA’s last surviving Spitfire continues at Air Force Base Swartkop in Pretoria). This documentary explores its development and reveals why it’s a plane worth obsessing over.

This is one of the timeless, classic dad models. His proudest moment might be helping you to fix up your first car and making sure you can change a tyre. Buckle up for the ride but don’t you crunch those crisps inside his pride and joy. Car Daddy has limits.

Want to know how I got these scars? My mouth split from laughing at terrible jokes. Funny dad might be the king of Dad Mountain. The Ultra Dad. He has ascended. This dad uses humour as a weapon and we are powerless before him, for he knows no shame. It’s time to give him more ammunition…

This family friendly sitcom centres around the African American Johnson family, led by Andre "Dre" Johnson, who struggles with finding his cultural identity while raising his kids in a white neighbourhood with his wife, Bow. On Friday, 17 June we’ll see what happens when twins Diane and Jack realise that they are the inspiration behind their dad Dre’s best advertisements at his agency!

Whether he’s reporting live from the living room sofa, giving a blow-by-blow to his braai buddies, propping up the team as he props up the local bar, or lucky enough to snag a seat at stadium, the sports dad is flying his flag high. Give him a toot as you pass him on the day of a big win, and cheer along with him this weekend.

Stream it live via the DStv App.

Get the DStv App (Apple or Android)