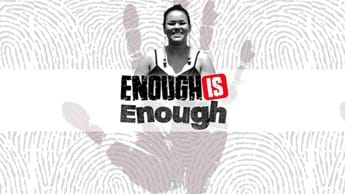 Musician, wife and mom Phumeza Mdabe is out there helping South Africans to reunite with their birth parents in the reality series Abandoned. She’s no stranger to confrontation and awkward family moments, and that’s been the perfect training for her new job as host of Moja Love (DStv Channel 157) series Enough Is Enough Season 1. In it, she reaches out to people whose lives are being destroyed by toxic family members. She tries to both mediate and to guide the families to the resources that can help their situation. The series is focussed on healing now, and to stop damage from being passed down, generation to generation.

Phumeza puts her foot down

How did you cope with people’s threatening behaviour in this show?

“I haven't really felt threatened in any way because I know that there are people who have my back. While shooting the series we always had security with us, so that if anything got out of hand, security could take care of it. If it wasn't for that, honestly, most of these situations I wouldn't walk into because you never know what to expect. People who are at fault normally don’t want to speak about it. They run away. Or they are like, “No, no, no. You must go to the courts.” Or they say, “Why are they lying to you, I never did that.” It's deny, deny, deny. And If I see that a situation is threatening, I don't go into it at all. I speak to my producer and say that I'm not comfortable with it. You can't walk in and think it’s just TV. No, it's their life. If they are desperate they can do anything that they think will help them get out of that situation.”

How do you convince an abuser to get help?

“It's really difficult sometimes. Some families will see it, others will want to walk out the door. So we go into the situation trying to involve social workers, trying to go for the private family courts – that's what we try to do – because we can get to them and speak to them and some will listen, some don’t. We bring in who we can to help out.”

Why do we see people allowing the toxic person to keep doing harm?

“In most cases it is because they are dependent on the abuser. For example, if there's an uncle in the family who is the breadwinner who abuses a child or molests the child – I've heard quite a lot of stories like that – it’s because he brings in money. I wouldn’t say the family doesn't want to help the child, but if they attend to this, then this (financial support) is going to stop. It’s like they choose wealth over the reality of the situation. And then if the husband is abusing a wife, sometimes the family will be on the husband’s side instead of the wife’s side because they are his family and she married into it. And they say, “Our son wouldn’t do that; our nephew wouldn’t do that.” Sometimes it's just protecting their own.”

Did you see the toxic people try to shift the blame?

“There was a man we approached where the woman wanted to have a divorce. They had married traditionally, and when they started the marriage, they didn’t have anything, so that meant they started building together. She found out about something that he was doing and wanted to divorce him and he said, “Fine, you can leave but you’re not going to get anything, because I am not the one who is asking you for a divorce.” He was not taking any responsibility for anything that happened in the marriage. This woman had been the 4th wife to this man, all of his previous 3 wives left him and he was still saying, “I didn’t do anything wrong”. I also saw a father take a woman to court and the court said the father must have his visitation rights every weekend, but when I spoke to her (the mother), she said, no, she doesn't see the need; they’ve broken up. She saw nothing wrong with the fact that she was the one who was now blocking the child from having a normal childhood. A lot of times, the toxic people did not want to take responsibility at all.”

Where does toxic behaviour come from?

“Toxic behaviour comes from how we are brought up and the things we pick up. Like, if we feel like we are not needed, we will be more needy. Unfortunately it is up to the individual in the family to try and identify if they have issues. Our generation now is slowly doing that, especially in the black community where things were set in stone and communication wasn’t the thing. If you were taught something, you’d do it that way and that’s that. If something happens you keep quiet because you cannot embarrass your father or your uncle. We come from a generation where our moms used to shout at us, and it was normal. But now that we’re in this generation, we’re like, “Maybe that's not the best way to communicate with our children.” It's up to the individual to identify those toxic traits and go, “I want to be a better parent, I want to be a better wife, I want to be a better sister.” Whatever rules you want to change, you can be better. And it helps to watch shows like Enough Is Enough. You will see these situations outside of yourself and you go, “Oh, snap! Okay. That's what's happening in my family. I think I need to try and address this.” That's how we can stop this from going to the next generation, just by identifying our own toxic traits, our own traumas, our own childhood that we need to heal, and say, “How do I begin to heal?” Because it can only happen one household at a time. It's a slow process. And as a black nation, there's a lot that we have to heal from.”

Moja Love (DStv Channel 157) is available exclusively on DStv Premium, Compact Plus, Compact and Family. To upgrade your existing package, click here. Or if you'd like to Get DStv, find a service that suits your needs here.

Watch the eKasi Champ of Champs: Plate and Cup Semi-finals

Get ready to go wild – at home and under the oaks

Listen to Podcast and Chill with MacG Mondays at 15:00 on YouTube to be part of the conversation.