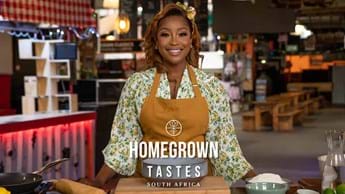 Lorna Maseko brings us farm-to-table viewing in Homegrown Tastes South Africa. She’s travelled the length and breadth of the country, gone to sea, hit the streets in Joburg, and got the soil between her toes and under her nails. It’s all worthwhile in a quest to make us appreciate what goes into the food we eat here, and to learn how to get the best from some for the best fruit, meat and veg in the world.

We asked Lorna for a little taste of her experiences…

How did you pick where you were going for the show?

“We really wanted to highlight and celebrate South African food and South African produce and the amazing chefs that we have in the country. The Winelands has some of the top restaurants in the world, Johannesburg is kind of like the trendy vibe, it’s “the” area for food. Each area, and the ingredients that we're highlighting, really spoke for itself. Homegrown Tastes feature quite a lot of things that I didn't even know, or had never cooked with before, like bitter gourd. We made a really delicious dessert with it. We highlighted Nguni meat, and we tried not to go for the big commercial guys, because we wanted to tell that beautiful, homegrown, South African story.”

What was it like for you going to visit farms?

“It was great to meet all the farmers. It's weird because as a person, you buy things in a store. What goes into something from either the soil or feeding an animal or the whole sustainability thing, there's quite a lot that goes in there for us to enjoy as food. For me it was a huge learning curve. I fell in love with the South African story and what farmers have to go through to get good quality produce. We did mebos, and I saw the apricots and how sweet they are here in South Africa. The farmer was telling us that the ones in Turkey, you can't make mebos so well with because you want that sweetness and salt in it.”

What was your longest road trip?

“I think it was landing in PE (Gqeberha), driving to Graaff Reinet, driving back to PE, catching a flight to Cape Town, driving from Cape Town to Paternoster. That was a long day. A long couple of days.”

Does Lorna pack a snack?

“Lorna doesn’t pack a snack. I probably just slept, or I was on my phone or watching Netflix so that it would go quicker. I try to keep myself busy. But if there was a snack that I think I did pack sometimes, it was definitely biltong. Because if I buy chocolates and sweets, I am going to gain weight, so I get something that’s somewhat healthy.”

What was 1 of your favourite adventures during the shoot?

“I would say going on the vessel and seeing what fishermen do to catch fish, 1 hook at a time. It's such a labour intensive job, and then (I was) having to filet the fish when it was fresh from the sea, which was amazing. And going to the cheese maker was pretty cool. That reminded me of my time in Italy where I got to see how they make parmesan. I'm a lover of cheese, give me cheese and I'm excited.

Does it shock you, looking at how relatively little raw produce sometimes costs compared to how much work goes into producing it?

“Yes. Chefs wouldn't be half the people they are if you didn't have a good farmer or a good producer. I think there hasn't been a show in South Africa that highlights the entire ecosystem like this 1. I hope people appreciate what goes into the piece of steak, or the beautiful carrot that is, bright orange, sweet and absolutely delicious. Hopefully, there'll be a lot more appreciation of what happens before it gets onto a plate and you enjoy it. And we really have featured some amazing chefs. I've been lucky enough to travel around the world because of Top Billing and all that, but in a couple of years, these chefs are going to be featured in the 50 World's Best, or just top tier.”

The past 2 years have been absolutely brutal for everybody involved in restaurants, in farming. Do people talk about it on the show?

“They do. Because it's real stories. It's what they've gone through. It's heart-breaking, but people just persevere. South Africans are resilient. They love what they do. It's generations of families that have been doing this for centuries, and so for them it's important to keep those legacies going. That's the beautiful story.”

What's 1 of the stories that touched you?

“We had a winemaker, and for them, it was great. And only now it's getting bad. Most of the buyers are international clients, so during the lockdown itself, they could still get their wines to the world. But now it's reversed. Now there aren't any planes to take their stuff. And the guy who makes mebos, he had the challenges of just being a farmer and people stealing. 1 story was a couple that started making sourdough bread during COVID. For them, it's been an amazing journey. Unfortunately, there were some really sad stories, too.”

Working with the chefs on the show, what’s 1 of the lightbulb moments that you had?

“Definitely when we went to Paternoster with Chef Adele. She made the most incredible dish using foraged goods from the sea and land. I'd never tasted anything so amazing. It was simple, but it was just packed with flavour. She used kelp and sea pumpkin, and dune spinach. It was just an array of where my palate was just like, “Oh, this is incredible” with things that I've never really… you know, we don't have a lot of foraging in Joburg. We don't have the sea. So girl power to her. And then the other 1 was definitely Chef Charné at Epice. In a couple of years, she’s going to be 1 of the top chefs in this country because she is super talented. Like, wow. She made a dish and off camera I was like, ”I'm just gonna have a little bit more if you don’t mind…”