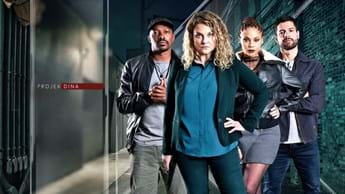 It can be soul crushing to deal with missing persons, stolen kids, human trafficking and gender-based violence, but someone has to be the voice for these people – a fighter who offers hope. And that’s what the Task Force in the kykNET (DStv Channel 144) crime drama series Projek Dina do: they help the vulnerable and put the evil criminals responsible for these gruesome deeds behind bars. In Projek Dina Season 2, the Task Force will face new challenges that will lead them to a crossroads – and difficult decisions have to be made.

After a difficult couple of months of handling missing persons cases, deputy officer Ronel Oosthuizen (Chanelle de Jager, Linda in the drama series Alles Malan) and her team finally arrived in Mozambique. All the clues to find Ronel’s missing twin sister, Dina, who was abducted years ago, led them there. “They found the missionary school where Dina was staying for years, but when they got there, she had disappeared again,” says Roberta Durrant, Projek Dina’s creative producer.

We take a time jump, with Projek Dina Season 2 set 2 years after the team’s disappointing journey to Mozambique. Deon Visagie (Tim Theron), Lux Dladla (Chumani Pan) and Charlie Botha (Kay Smith) are still working on the Task Force – with hacker Charlie as an official part of the team since she completed her police course work – but Ronel Oosthuizen (Chanelle de Jager) has “retired” herself while she processes the trauma from her failed search for her twin. When Lux approaches her for help, though, Ronel can’t resist getting back into the field.

What can we expect in Projek Dina Season 2? “Lots and lots of drama. But even more than that: we want to raise awareness around human trafficking, gender-based violence and violence against kids,” says Roberta. “Each of the 10 episodes in this season is inspired by true stories, like a syndicate that keeps on getting more prominent, a missing persons case that is 25 years old, and even Captain Deon Visagie’s (Tim Theron, Col. Bob Nortier in Die Byl) love interest Karen (Jana Kruger, Julia Cilliers in the drama series Afgrond) goes missing. And, of course, viewers can also look forward to more clues that will lead Ronel to Dina,” Roberta hints.

See the character guide on the Projek Dina Showpage for a catch-up on how each member of the team will be starting this season.