Watch Fatale, The Wrong Cheer Captain, San Andreas, Fight Back To School II, and I Know What You Did Last Summer on DStv Movies 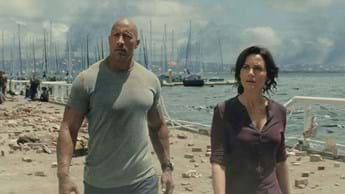 Need a workout? There’s nothing better than kicking your shoes off and getting cosy on the couch with a good movie. But where to find some pulse-pounding movies that’ll make your Fitbit watch freak out? On DStv of course!

The best time to get your movie fix is this weekend, starting with The Wrong Cheer Captain on Lifetime (DStv channel 131), and then there’s M-Net’s (DStv channel 101) Sunday Night Blockbuster Fatale with beautiful actress Hilary Swank in the lead role.

Other movies that will keep you captivated on Saturday include the classic movie I Know What You Did Last Summer, as well as action movies Fight Back To School II and San Andreas with Hollywood’s biggest action star, Dwayne Johnson.

Not enough? Remember you get access to 4 Premium movie channels for just R99 per month when you ADD Movies to your DStv account, no matter which package you’re on.

Oscar-winner Hilary Swank and Michael Ealy drive this gripping thriller in which a married man’s decision to have a 1-night stand in Las Vegas comes back to bite him with severe repercussions.

A young cheerleader named Kate (Alexis Samone) suspects that their squad’s new captain, Anna (Sofia Masson), got rid of her main rival… permanently. But when Anna realises that Kate might be onto her, she starts destroying Kate’s life. With Vivica A Fox as Kate’s mom, Carol.

Action star Dwayne Johnson must conquer his fear and the elements in this disaster movie. After a deadly earthquake hits California, a rescue pilot flies in to save his family.

Fight Back To School II

In this action comedy, police officer Chow Sing Sing quits the Special Duties Unit after being demoted and goes undercover at a school to investigate a threatened terrorist attack, only to run into incompetent undercover detective Tat. With Stephen Chow, Sharla Cheung, and Ng Man Tat.

I Know What You Did Last Summer

You can’t go wrong when you tune into this classic film about a group of friends who’re stalked by a mysterious figure with a hook a year after covering up a car accident in which they killed a man. Starring Jennifer Love Hewitt, Sarah Michelle Geller and Freddie Prinze Jr.