Back to school? Get back to cool, too, with the best kids shows on DStv this week, like the Felix & The Treasure of Morgaa movie and Ouchtastic! 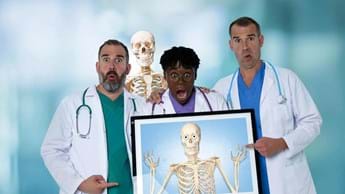 Class is back in session, but that doesn’t mean it’s all chores and homework. When it’s time to relax, the little ones can tune into some amazing new episodes of their favourite kids’ shows on DStv – with fresh new seasons ready and waiting for them this week.

Felix & The Treasure of Morgaa is a must-watch kids movie full of animation and adventure, and then there are new episodes of kids shows Paw Patrol, The Casagrandes and Ninja Express.

The cherry on the cake is the informative kids’ series Ouchtasic! on Da Vinci (DStv channel 318) in which a group of doctors will teach children more about their body parts and their functions.

Watch, laugh and learn with even more children’s shows and movies on the DStv App.

Felix & The Treasure of Morgaa

An Animated adventure movie for the kids to enjoy! 12-year-old Felix sets off to find his father, a fisherman who vanished at sea 2 years back. His journey takes him to the lair of megalomaniac Morgaa and her secret society who live in an underground city on Darkshadow Island.

Ouchtastic! is a series of themed episodes in which Dr. Chris, Dr. Xand and Dr. Ronx delve into the Operation Ouch! archives, to celebrate 5 parts of your incredible body: Your skeleton, digestive system, eyes, ears and teeth.

In new episodes of this kids’ show about a group of puppies who work together on high stakes rescue missions, the pups are called in to help when a carnival train gets stuck in a tunnel.

Ronnie Anne Casagrandes and her big family learn how to steer life and the changes it brings when they move to a new city. In new episodes, Carlota fails at hair cutting, but she is determined to be the best so she goes for training with the master barber himself – CJ!

In this awesome kids’ show, 3 little Ninjas with incredible powers run a magical delivery service that delivers anything, anywhere. In new episodes, the magician Merlin summons the Ninjas to pull the legendary sword from the stone, and later a fairy-tale princess orders a new Dragon from the Ninjas.