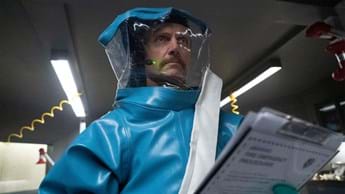 National Geographic’s (DStv channel 181) docu-drama The Hot Zone tackles a new deadly outbreak in its second season, which focuses on the “Amerithrax” attacks, in which deadly anthrax was sent to journalists and politicians shortly after the September 9/11 terrorist attacks. The series turns the gruelling 9-year investigation into who was behind the attacks, into six hours of tense drama, full of unexpected twists – based on the real-life case.

We spoke with The Hot Zone: Anthrax showrunners Brian Peterson and Kelly Souders (the duo behind the Stephen King series Under The Dome) about writing the show, and the debates behind the scenes.

And read here for more on the show’s sets…

In real life, this was a massive 9-year investigation. How did you squeeze it into just 6 episodes?

Brian: We usually try to start with character and dive into the different journeys along the way. That's really where we started with Bruce Ivins. And there were so many FBI agents that we really were trying to figure out how to create the best fictional character to take you on this journey, because people came and went from that investigation over the course of it, so frequently. It was really about building the character of Matthew Riker.

Kelly: In our writers’ room, we have these huge whiteboards on the wall. 1 of the things we did early on was really put the key events on these boards so we could start seeing how they would need to lay out, per episode, in order to get through many, many years, in just six hours. I remember those boards, they're seared into my memory, the early ones (laughs)!

In real life you have this massive urgency at the beginning, but then the investigation stretches on and on and on. How did that affect your writing?

Brian: It was really interesting to us how the investigation broke into episodes, because there were very different arenas. There was the New York arena, the Florida arena, the DC arena… And so that really gave us a jumping off point to figure out how to shape the series and give people a really, really different episode every time, still on the same track, but hopefully not ever where you think the story is going to go.

Kelly: The twists in the second half seem so bizarre. It’s things you cannot comprehend that happened over the course of the investigation. Even though the beginning is about trying to hone in on where this is coming from, the second half is doing the same thing, but in a very different way, where you're really delving now into the characters themselves. And some of the roadblocks in the investigation are shocking and surprising.

What questions do you still have about the real-life events?

Brian: We were asking the same questions we hope the audience is asking. There is a lot of ambiguity at the end. There is an alleged perpetrator, and there are different people who have different points of view even today. We tried to represent each of those points of view, but it took a lot of conversation in the writers’ room, with everybody weighing in on the different research that they had done and, day by day, as more research came in honing, honing, exactly which points of view and to what degree we were representing each one.

Kelly: We'd all read different things that we glommed onto, just like investigators. One of us would be focused on one area that, to somebody else, didn't seem important at all. They were really intrigued and pulled into different areas. I assume they do that at the FBI – they all sit around and argue – and we were doing that in the writers’ room.

What was your linchpin?

Brian: It all came down to the last episode and the multiple pieces of science that came together. You’ve got to watch it carefully and have your thumb on the rewind button, because there's a lot of information that comes at you.

Kelly: We started breaking down the show, and a year later, as we were heading into shooting that last episode, we were still arguing about what we thought was important! It literally was a year-long tug-of-war between us, I think we finally got it on the place where it hit everything that we were both thinking…

Brian: That’s what we love. Just to put the facts out there and, and leave them, as much as possible, void of our own points of view. We leave the discussion a little bit open.

National Geographic (DStv channel 181) is available on DStv Premium, Compact Plus, Compact, and Family. To upgrade your existing package, click here. Or if you'd like to Get DStv, find a service that suits your needs here.

Card Link
Back to News
International 08 December 2021
Behind the scenes on The Hot Zone: Anthrax Season 2