A Look at The Hot Zone: Anthrax Season 2 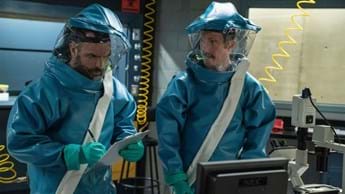 National Geographic’s (DStv channel 181) docu-drama The Hot Zone takes us from one super-high security location to another across the United States. We go inside USAMRIID (the United States Army Medical Research Institute of Infectious Diseases), where they study diseases so deadly that they could be used as biological weapons, to the newsroom floor in NBC’s 30 Rock building, to the FBI’s Hoover Building, to Capitol Hill in Washington DC… to the place that possibly the fewest people had access to: The basement of Dr. Bruce Ivins’ (played by Tony Goldwyn) stuffy suburban home, where he has a surprising shooting gallery complete with giant American flag.

We spoke with The Hot Zone: Anthrax showrunners Brian Peterson and Kelly Souders (the duo behind the Stephen King series Under The Dome) about a couple of set details…

The investigation takes place in multiple high-security buildings. Were you able to shoot anything on the original locations?

Kelly: No. We have to give so much credit to Britt (production designer Britt Doughty) and our whole crew, from the props to the sets being built. All of them did as much research for their areas of expertise as we did on the story. It's really phenomenal what they were able to pull together. It was just the 1 positive thing with COVID, filming during COVID, a lot of the locations were empty, so we were able to get access to things that we probably would not have been able to had it not been COVID days.

Brian: We just couldn’t populate them with extras because we couldn’t have that many extras in that space. There's 1 really fantastic architectural brutalist mid-century college or university, where the students were not in person in classes. But as long as we were very careful, which we were, we could access some of these spaces. If you're paying attention, it's kind of a mid-century, brutalist wonderland in places, which we use for the FBI to mimic the Hoover Building in Washington DC. It has so much of the same texture as that original building.

What was the set for Dr. Bruce Ivins house based on? There are some crazy details!

Kelly: We don't get too deep into any personal life, but we needed to show him at home and away from work. We had the photo of the real house, and it was everyone coming together to create what they thought might be inside. There was something interesting about looking at photos of him personally, and trying to create a little bit of a personality. There’s a real warmth to that house, it feels homey, lived-in and real to the times. A lot of thought was put into that location.

Brian: Nostalgia played a big part of it. Just from the bits that we read, it seemed like Bruce was a man who… nostalgia played a part in his tastes. We wanted to bring that in, and Britt did an amazing job of bringing that to that space, to the car, to the music, to the things that surrounded him and his environment.

And then you have the complete contrast of the shooting gallery in the basement. Is that factual?

Kelly: If you're spotting something and going, “Is that real?!”, it's because it is real! All the rest of it is just the tissue that we've created to bring those moments together. But yeah, we had to go through quite a bit of vetting with National Geographic because this is a scientific show, and they have a scientific lineage. All over the world, they are known as a reputable organisation. So they put us through the wringer on all of those facts. And we hired other researchers to double-check our work. We had writers and people on our staff that were triple checking it. There's many, many layers of double checking. They were looking at source materials that we were using as research, left and right, to make sure that we got it right.

National Geographic (DStv channel 181) is available on DStv Premium, Compact Plus, Compact, and Family. To upgrade your existing package, click here. Or if you'd like to Get DStv, find a service that suits your needs here.

Card Link
Back to News
International 08 December 2021
Behind the scenes on The Hot Zone: Anthrax Season 2