Watch The Witches, Minari, Gone Mom: The Disappearance of Jennifer Dulos, The Stand In and Kung Fu Fighter on DStv this week 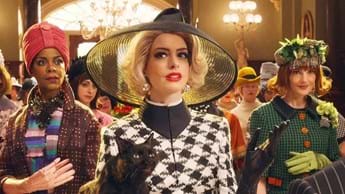 These five fabulous movies are just the tip of the viewing iceberg this week on DStv.

Looking for something a little more sinister? Lifetime’s (DStv channel 131) Ripped From The Headlines movie Gone Mom: The Disappearance of Jennifer Dulos will give you chills.

Then, martial arts fans are in for a treat with the Bruce Lee classic Kung Fu Fighter on KIX (DStv channel 114) and Showmax adds to the movie action with comedy film The Stand In.

Want even more movies? Remember you can ADD Movies to get three Premium movie channels added to your DStv package each month.

Fantasy based on Roald Dahl’s 1983 book of the same name. An orphaned boy (Ahzir Kadeem Bruno) who lives with his grandmother (Octavia Spencer) accidentally lands up in the middle of a witch convention, led by the Grand High Witch (Anne Hathaway).

In this comedy film, comedian Candy Black’s (Drew Barrymore) life comes crashing down when she’s charged with tax evasion and is forced by the courts to attend rehab. But what if she could get someone else, a look-a-alike, to do all of that for her?

Watch The Stand In on Showmax from Thursday, 25 November

Ripped From The Headlines movie inspired by the true story of Jennifer Dulos, a mother of 5 who vanished after dropping the children at school. While her husband, Fotis, claimed that she’d staged her own disappearance, questions went unanswered after he committed suicide and her body was never found.

Watch Gone Mom: The Disappearance of Jennifer Dulos on Saturday, 20 November on Lifetime (DStv channel 131) at 19:20

Ma goes looking for his father in Shanghai. He and his new friend are saved by martial arts masters when gangsters hunt them down, but the fight has only just begun. Starring Bruce Leung, Danny Chan Kwok-kwan, and Emma Wong.

News 25 October 2021
Get ready for festive with DStv

A merry month of movies on DStv this December, from romance in the snow, to sunny South African stories

Learn, play and stay safe with DStv Island Adventures on the MyDStv App