Series and movie highlights on DStv Family in November 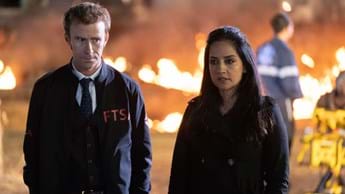 November is a month of big, bold drama on DStv Family.

The thrilling and plotty accident investigation series Departure returns at last as Archie Panjabi’s character looks for the truth behind a deadly train derailing, and more women investigators take the spotlight when Lucy Lawless’s series My Life Is Murder and Poppy Montgomery’s Unforgettable return, too. Then the romantic, musical telenovela The Insolent Heart shows what could happen when you give love a second chance.

And Universal TV (DStv channel 117) launches their festive movie slate with 4 brand new romantic movies to get you dreaming of your own jolly holly heart warmer. Along with hits like the time travel love story A Timeless Christmas, you’ll be able to see a different festive movie every day at 15:00 from Monday, 1 November.

In this conspiracy thriller, accident investigator Kendra Malley (Archie Panjabi) is called to the scene after an experimental high-speed train crashes in rural Michigan. The case places her in the centre of a number of groups with conflicting goals, from shady tech moguls to cartels and politicians who see the case as their stepping stone.

My Life Is Murder S2

In the final season of this crime drama, Carrie uses her memory skills to help the NYPD’s Major Crimes Unit to catch their Most Wanted criminals. Carrie’s ex-husband Eddie helps her to help track a pair of drug couriers, and Carrie and Al escort Rosie (Rachel Dratch), an eccentric star witness, to a trial in Florida.

In this romantic, musical telenovela, Abeer (Pearl V Puri) and Meher's (Samita Sood) marriage ends under the strain of too many differences. But after 8 years Abeer starts falling for Meher all over again when he’s forced to live under her roof, and he gets to know their son, Ishaan, for the first time.

Watch Mondays-Fridays from Monday, 1 November on StarLife (DStv channel 167) at 22:00

A man named Charles Whitley (Ryan Paevey) time travels from 1903 to 2020, where he meets a young woman named Megan Turner (Erin Cahill) who shows him how we celebrate a 21st Century Christmas. Megan and Charles fall in love, but Charles has a fiancée back in his past.

Christmas In Evergreen: Bells Are Ringing

With Michelle (Holly Robinson Peete) sucked into wedding preparations, Hannah (Rukiya Bernard) steps up to take over the launch of the Evergreen Museum. But her friend’s upcoming marriage has Hannah questioning her relationship and future with Elliott (Antonio Cayonne).

Christmas At The Plaza

Jessica (Elizabeth Henstridge), a historian hired to create a Christmas exhibition honouring the history of New York’s famed Plaza Hotel (the setting for the Eloise books), falls for Nick (Ryan Paevy) the handsome decorator who’ll help her to bring the exhibition to life.

Margot Hammond (Merritt Patterson), a world-famous pianist who’s lost her passion, returns to Chateau Neuhaus and her family for Christmas. Her ex-boyfriend and former music partner Jackson (Luke Macfarlane) reconnects with her and asks her to headline their annual Christmas Concert.