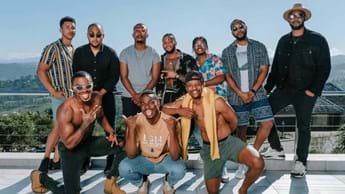 These four couples might look like perfect pairs, but they all have something in common: they want to know if they're meant to be together forever. And they're going to find out on Temptation Island!

Meet the eight people who are brave enough to allow their significant others loose in a villa filled with 10 sexy singles - will they leave the island knowing their partner was The One all along, leave with a new soulmate or could they even leave alone?

The bisexual bad boy and the sassy socialite found each other on the party circuit. She knows how to handle a man, and he knows how to charm a woman, but do they know how good they have it with each other? This couple, who have been together for a year and a half, always turns heads, but Nthabi is still worried about MJ’s playboy reputation.

Can they accept the fact that they are in a good relationship? Or will jealousy and ego ruin their partnership?

They say opposites attract, and that seems to be true for this couple. Although they love each other, Sifiso feels that Musa doesn’t respect him for the man he is, while Musa feels unappreciated and worries about Sifiso's wandering eye. They’re looking for an opportunity to reevaluate their love and learn to communicate better on Temptation Island.

This long-term relationship started when the pair met at the University of the Western Cape. Now, after a year of living together, Precious and Grant wonder if they’ve lost their spark and become too comfortable. Will Temptation Island remind them why they fell for each other in the first place – or will they get more than they’ve bargained for amid 20 sexy singles?

After over a decade of dating on and off, Estelle and Justin recently decided to take the leap and be exclusive. But it’s not so easy to commit: Justin feels like Estelle is too harsh with him and is shutting him out, and Estelle is scared that Justin just doesn’t like who she is as a girlfriend. Can these two make commitment work?

Temptation Island South Africa premieres on 26 August 2021 on Showmax, with new episodes every Thursday until 4 November 2021.