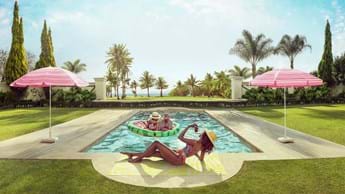 The first episode of Temptation Island South Africa — based on the Banijay-owned hit reality format — is now streaming on Showmax, and it’s already clear that the four couples are in for the ultimate relationship test.

Estelle Langa and Justin Fritz, Musa Qubinkomo and Sifiso Ndlazi, Nthabiseng Maphago and MJ Maponya, and Precious Khumalo and Grant Manuel may have all arrived in paradise (aka Knysna) together, but, now that they’re in separate villas, living with sexy singles, will they leave with each other, or with someone better?

The first episode’s big talking point is going to be the introductions from the 20 single men and women who are looking for love. The couples sat together for their first glimpses of temptation, but the singles didn’t hold back.

Rap queen Gigi Lamayne told the guys, “I’m a musician and I can’t wait to sing on your mic and rap circles around you,” while Nicole Kaas said, “You can call me Coco. I own an upholstery company, so I’m used to seeing things get taken apart and put back together the way I want it done.”

And the men were just as direct. “Good evening, ladies,” said Dainamiaro “Dain” Ogulu. “I’m a sexy model from Nigeria. I might be standing on two legs, but my third leg holds me out.” Calim “Muggz” Mgagula broke into a slow dance routine while introducing himself as an exotic dancer and firefighter, while stand-up comedian Tats Nkonzo said, “I’ve asked myself over 100 times why I am doing this, and I’ve had 100 different answers. But tonight, I only have four…”

It was immediately clear that Showmax has lined up a temptation for every taste. When asked about their odds of leaving together, both Nthabiseng and MJ and Estelle and Justin gave themselves a confident 10/10; Grant said 10 but Precious 9; and Sifiso 9.5 but Musa 8. But they hadn’t met the temptation on offer yet…