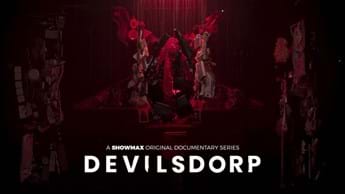 Hell comes closer to home in the first-look trailer for Devilsdorp, the first Showmax Original true crime docu-series, which will be available to binge from 29 July 2021.

In 2016, a spate of brutal Appointment Murders gripped the town of Krugersdorp, leaving sales people and consultants terrified to book meetings in case they were the serial killer’s next victims. The investigation led detectives to a series of unsolved cold cases, the so-called Satanic Murders, and to links between 11 Krugersdorp killings between 2012 and 2016. They discovered these were the work of the Electus per Deus (Chosen by God) cult.

“The result of an 18-month research process, Devilsdorp shows again that truth is stranger than fiction, especially in South Africa,” says director David Enright. "This is the story of the events that rocked an entire community and forever changed the lives of those involved, especially the families of the victims. What started as a group of devout Christians trying to help a former satanist escape the satanic church ended in a murderous spree involving a killer mom, her two children, and a cult with more victims than members. It may all sound too far-fetched to be believed, except it really happened - just down the road from us."

“We know our audience is fascinated by local true crime,” says Candice Fangueiro, Showmax’s head of content, pointing to the popularity of the SAFTA-winning film Griekwastad and the SAFTA-nominated series Huisgenoot: Ware Lewensdramas. “There’s something deeply unsettling about watching a true crime series where the victims - and perpetrators - look and sound like your neighbours, and where you can recognise the locations.”

Alongside extraordinary footage of exorcisms, church meetings, and trial testimonies and judgments, Devilsdorp features first-hand accounts from the likes of Captain Ben Booysen, the senior investigating officer; deputy director of Public Prosecutions Gerrit Roberts; Discovery claims specialist Shane Chatzkelowitz; and journalist Marizka Coetzer. The family of the victims also share their stories, as do church members who knew the perpetrators. Netwerk24 journalist Jana Marx, author of The Krugersdorp Cult Killings: Inside Cecilia’s Steyn’s Reign of Terror, narrates the series, which is produced by IdeaCandy.

“You may think you know this story,” says IdeaCandy producer Wim Steyn. “But you don’t. This is one of those stories where things are seldom as they seem, and where the road to hell is paved with good intentions.”

Binge all four episodes of Devilsdorp, which is rated 16, from 29 July 2021, first and only on Showmax.