Walk into the Lioness’ den 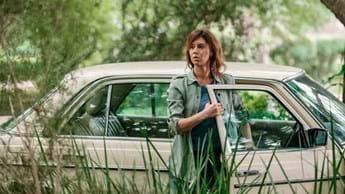 There’s a reason that Shannon Esra’s character Samantha Hugo is dubbed Lioness in this thrilling action-drama show. She is fierce yet nurturing and she’ll go to any lengths to protect her family, especially her three children.

It’s no different in Season 2 of Lioness, starting on Thursday, 26 January on M-Net (DStv Channel 101). The series picks up following a murder scene that left viewers on a cliffhanger. As it played out in the Season 1 finale, Samantha’s son, Liam (played by Joshua Eady) fatally shot his father Adrian (Jacques Bessenger) and the family buried the corpse in their garden. Now, Samantha is on a mission to shield Liam from getting arrested. What will it take for Samantha to shelter her pride and ensure that Liam doesn’t land behind bars?

Things get worst for the Hugos when Adrian’s second wife Bianca (Carla Classen) arrives to search for her missing husband. She isn’t alone in her hunt as her half-brother Max (Carl Beukes) does whatever it takes to help Bianca find justice.

Meanwhile, Samantha will go against the law to keep Liam and her family safe. “Sam paints outside of the lines, often diverging from what may be acceptable under the rule of law, which is always a scary thing to encompass authentically and with a sense of truth,” says Shannon, adding “But in doing so, I honour the character’s journey, and hopefully, the audience will be right behind her!”

Newcomers for the season include: award-winning actress Vinette Ebrahim (Barakat) plays Vera, an introverted and aloof ice queen whose fractured family needs warmth. Theo Landey (Black Sails) joins the cast as Thomas, a sensitive and intelligent teacher whose kindness lands him in trouble. Ayden Croy (Verstikking) plays Kevin, a young man who is trying to build a new life after a tragic past.