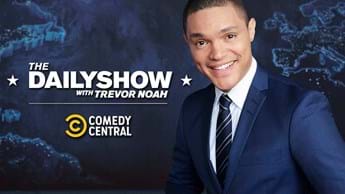 Having filled The Daily Show seat for over seven years, comedian, Trevor Noah’s last episode will air on Friday, 9 December on Comedy Central (DStv Channel 122). In the run-up to the finale, you can tune into highlight episodes of the satirical late-night talk show. You’ll get to see the moments that broke the internet, had viewers crackling, or the Between the Scenes – when Trevor would lift the curtain and interact with the audience while the show cut to ad breaks.

What’s more is that between 12-23 December, the episodes will shine a spotlight on African entertainers that were on the hot seat such as Burna Boy, Black Coffee and Zozi Tunzi. Below, we look back at some of Trevor’s most sensational Daily Show moments.

Watch The Daily Show With Trevor Noah Season 28, Tuesdays-Fridays at 23:30 on Comedy Central (DStv Channel 122) and on Catch Up.

Trevor’s first guest on The Daily Show was comedian, Kevin Hart in September 2015. What lit a fire was when he hosted an eye-opening interview with conservative media personality, Tomi Lahren in December 2016 (the interview has over 18 million views on YouTube). Trevor went on to host his honorary uncle, former US President, Barack Obama – thrice. He also had a chat with environmental activist, Greta Thunberg and Nobel Prize winner, Malala Yousafzai. One of Trevor’s most memorable episodes was when he gleefully hosted talk show queen, Oprah Winfrey.

Trevor revealed what it’s really like to be “semi-normal” at Hollywood’s most star-stuffed awards show. You might queue outside a party with Terry Crews and Keegan Michael Key, but you’ll all get swept aside when Jennifer Lopez comes by.

In March 2020, in the midst of the pandemic lockdown, Trevor went from his slick studio, suits, to his flat in New York, hoodies and longer hair. He continued hosting the show from his home and interviews celebs like Nomzamo Mbatha. One of Trevor’s highlights was when he discussed George Floyd’s murder.

In 2022, Trevor got serious about the media circus surrounding Kanye West and Kim Kardashian’s divorce.

Watch The Daily Show With Trevor Noah Season 28, Tuesdays-Fridays at 23:30 on Comedy Central (DStv Channel 122) and on Catch Up

Comedy Central (DStv Channel 122) is available on DStv Premium, Compact Plus and Compact. To upgrade your existing package, click here. Or if you'd like to Get DStv and find a service that suits your needs here.