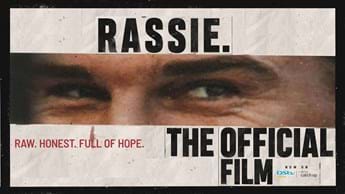 From being a star rugby player in his teen years to coaching and guiding the Springboks to World Cup victory in 2019, Rassie Erasmus takes viewers on his life journey in documentary series, Rassie: The Official Film – which is now available on DStv Catch Up for Compact customers.

Rassie travels with viewers to his hometown, Despatch in the Eastern Cape and he shares the struggles that he’s faced along the way. He discusses his childhood memories, and we see the world through the eyes of the young Johan, who grew to become a legendary talent on the field.

We had a chat with Rassie about the film, read below for more from the rugby legend.

Rassie: The Official Film is now available on DStv Catch-Up for Compact customers until Sunday, 8 January.

Rassie: On the record

What is Rassie: The Official Film all about?

The Official Film is a story about my life, career and how I started my rugby journey. I look back at my childhood and delve into the moments that shaped who I am today. It’s a story of hope and achieving true change. I also hope it shows that no matter your background, you can make something of your life.

What do you think people will learn about you from watching the documentary?

I’m truly dedicated to change. I believe that if others are equally committed to improving the lives of others, they can contribute to a better society and South Africa.

What have you learned about yourself from being part of the documentary?

If you want to change, you have to believe that it’s necessary and true. It will take hard work to fix problems from the past and unite the country, not just in sports but the society at large – this includes people of all classes, cultures, and religions because everyone has an important role to play.

It meant the world to me, especially seeing how it united the country and inspired many young players of colour to take up rugby and support the game. That said, it was never the plan for us to win the 2019 RWC. Our planning was mainly geared towards the 2023 RWC. If anything, that victory was a surprise to us. Our focus now is on the 2023 RWC and getting the team on the right track to hopefully enter the tournament as one of the main contenders.

You’ve just turned 50. How did you celebrate the day?

We played a test match against Ireland that day, so the entire team and I were in full-match mode throughout the day. Unfortunately, the result didn’t go our way, and when we returned to the hotel, we had to pack immediately and leave for France the next morning. In other words, there wasn’t really time to celebrate.

Rassie: The Official Film is now available on DStv Catch-Up for Compact channels until Sunday, 8 January.

To upgrade your existing package,click here. Or if you'd like to Get DStv, find a service that suits your needs here.